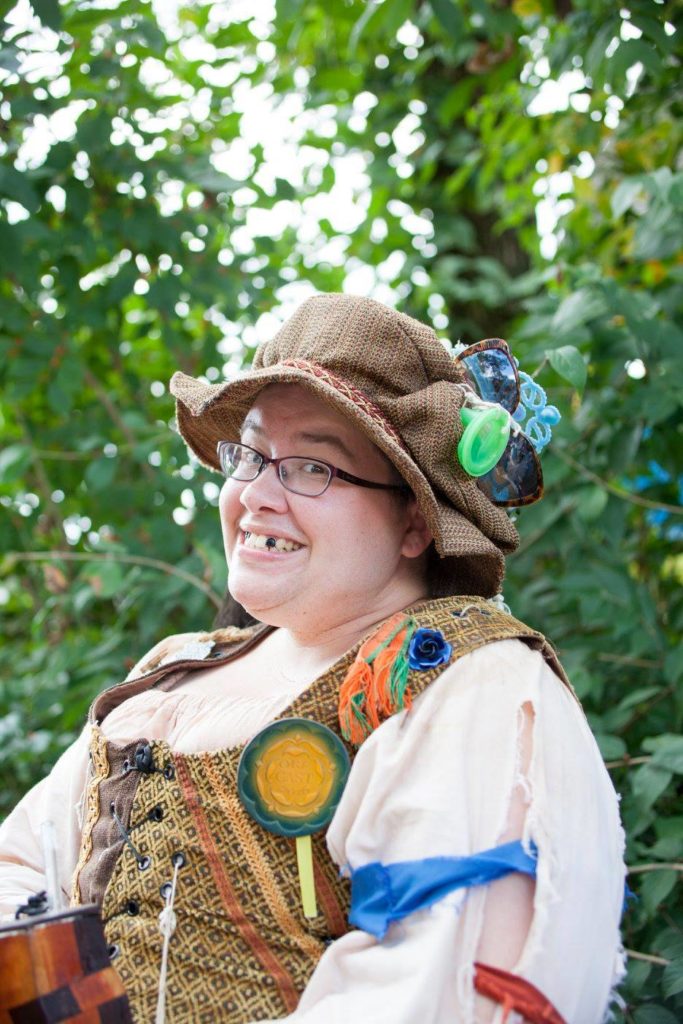 There’s always room for new blood on cast. Each year brings out the dramatically inclined and introduces them to the wealth of activity and expression that only faire can offer. But it takes the vets to help corral all this energy and potential into a formidable troupe of performers that will keep the crowds entertained. It’s not unusual for a newbie to get taken in by one of the more senior vets who can show them how to get into character.

One such vet is Jeanne Delahunty, who is currently entering her 16th year on cast. After being taken in by the rat catcher family during her early years at faire, Jeanne has brought life to characters from the lowliest trash monger to the village nun. These characters are often bright and engaging, inviting guests and cast members alike into the spectacle of her performance. Behind the scenes she often makes herself available as a guide to newbies, giving them advice on how to put themselves out there and expand their improv skills.

While some of the Willy Nilly cast are historical figured, Jeanne seems to be moved towards the humble villager, allowing for a more developed personality that is unrestrained by popular perception. She has belonged to at least two of the well-known families of the village, namely the Scruffins rat catchers and the Poodleflogger trash-mongers. Both families create interesting group dynamics within the improv scenarios in the lanes, letting the public become privy to their family “drama” as it plays out.

What is your home faire?

Jeanne: I’ve visited several others, though- Bay Area (Tampa), Georgia, Carolina, Kentucky, and Bristol. Most of those visits have been done with other members of street cast, bringing our characters from Willy Nilly all around the renaissance!

What was the first year you attended as a patron?

Jeanne: I’ve actually never attended ORF as a patron! I moved to Northern Kentucky in the spring of 2005, and joined cast that summer. (I did attend one day of Celtic Fest as a patron, though, if that counts!)

What was the first year you joined?

Jeanne: 2005, and I’ve been with street cast every year since! (This year marks my 16th year as a member of the street cast.)

Talk to me about your characters. Who was your first? Who is your favorite?

Jeanne: My first few characters were relatively unremarkable, and most of them were only played for a year or two. But then…

Dilettante Scruffins – Village Rat Catcher – 2009-2013 – Recently featured on the ORF Facebook page! Dilettante was the first female rat catcher in the Scruffins family. The Scruffinses had provided the village’s rat catchers since the festival began, so being the first girl was quite an honor… though Dilettante tried to be as much like her brothers as possible, so folk wouldn’t remember she was a girl at all. She could often be found walking around the village balancing her hammer on her head – a trait that seems to have been passed on to other Scruffinses since then!

Sister Edith – Village Nun – 2014-2015 – She was a misplaced ex-Catholic nun, tasked with the unenviable job of bringing religion to the villagers of Willy Nilly. Her hat was wider than she was tall, though, and there were times she might have taken off under a strong wind over the Upson Downs!

Matilda – Washer Wench – 2018 – Performing alongside the illustrious Sophie, she joined the Washer Wench stage show for select weekends this season.

Meretricious Poodleflogger – Village Trash Monger – 2016-Current – It’s hard to pick favorites, but… Meretricious is definitely my favorite. She’s the low person of the village strata, but delights in every aspect of her life because she just doesn’t know any better. You’ve probably seen her wandering around the village looking for her next piece of treasure (one person’s trash…), which she then happily displays wherever she can affix it to her clothing. During the 2019 season, she lead the very successful PFFFTTTH revolt alongside Patch Havoc, including appearances on the front gate, stunt show, chess match, and closing gates. The peasants are revolting, indeed!

Who are you playing this year? What goes into their creation?

Jeanne: The idea of playing a Poodleflogger (another longstanding family name among Willy Nillians) came at the end of the 2015 season, when I was brainstorming character thoughts with two other friends – one of whom that was on cast already, the other who was planning to join in 2016. We decided to create ourselves as three sisters – Meretricious, Meticulous, and Mindy. Meretricious the dirty, trashy one – in the quite literal sense; Meticulous, the Lady Mayoress’ housekeeper; and Mindy, who just liked all the shiny things either of her sisters brought around.

I’ve described Meretricious as a delightful mix of Ariel from The Little Mermaid and Forrest Gump. She loves to collect things, even if they might seem meaningless to others, and she has a certain lack of object permanence – her favorite thing is whatever she can do or see in that very moment. It gives her a bit of whimsy – and certainly makes her very freeing to play!

What is the most important thing about the Renaissance Festival to you?

Jeanne: The people and the magic… but there is no magic there without those who make it. The street cast helps to create a safe play space for one another – an escape from real life’s doldrums, a place where you can step out of your worries and stressors and just remember what it feels like to play again. That magic comes through with all those who pour their love into the grounds – whether that’s sweating through hot August rehearsal days or showing up at the front gates on a miserable October rain day.

What keeps you coming back year after year?

Jeanne: The excitement that we (as street cast) all start to feel around March or April. The vague (or sometimes not so vague) posts on Facebook about new character plans or shopping for updated garb fabrics. The wonder and sometimes utter terror on new cast members’ faces… and the delight when it all finally clicks for them. Being able to teach others about something and somewhere that has brought me amazing delights and incredible friends who have all changed my life.

What advice can you give people who are interested in joining faire?

Jeanne: Be open-minded, be willing to play, and don’t expect your life to ever be the same again. 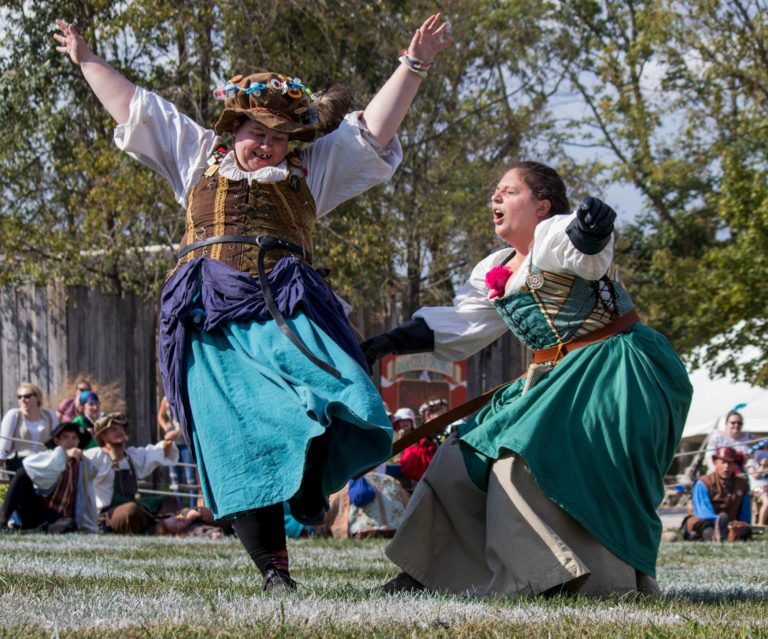 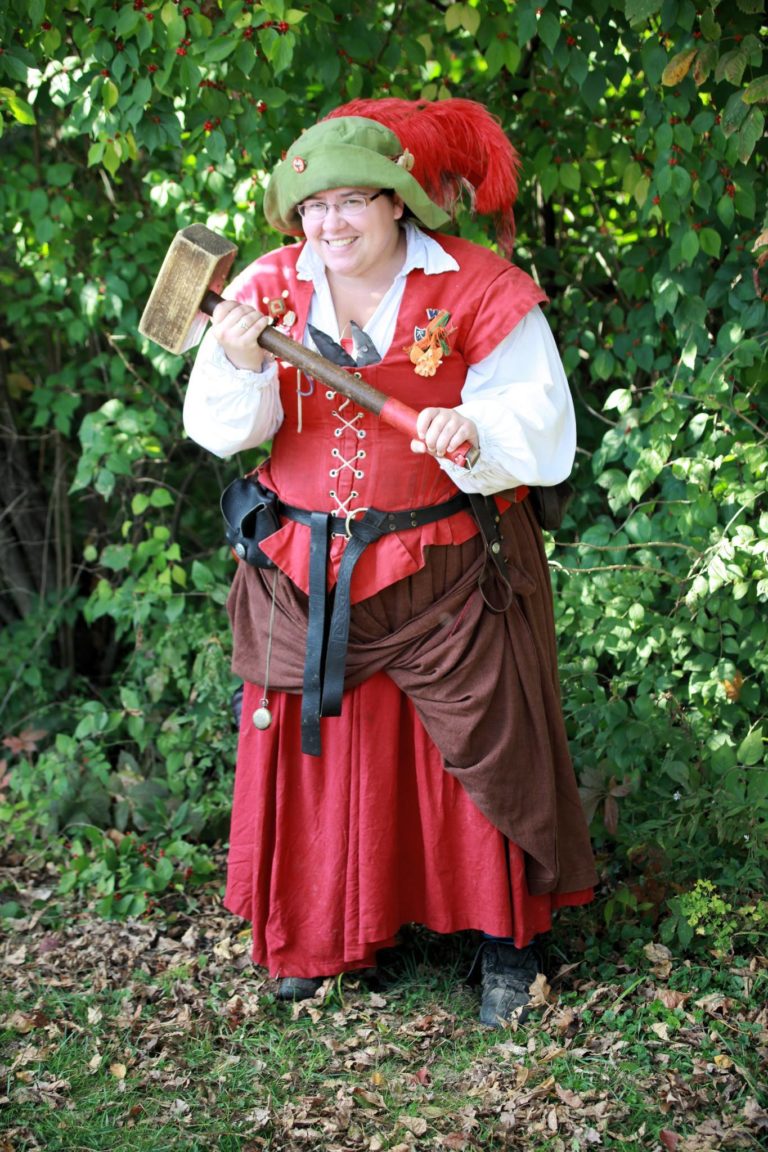 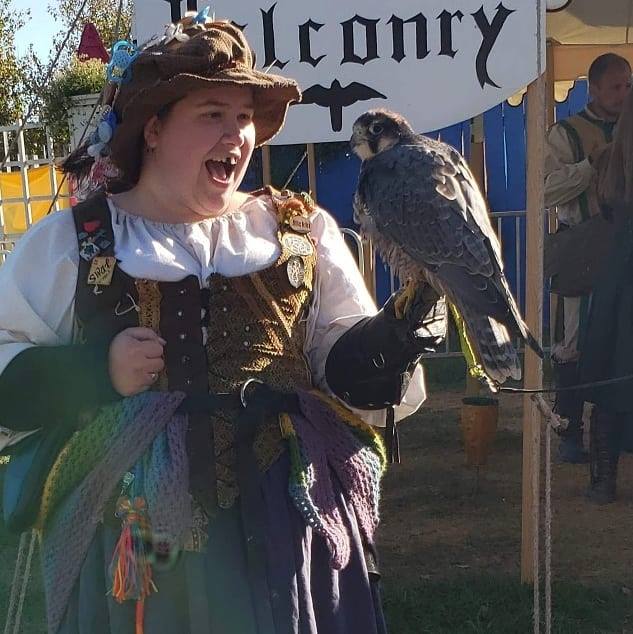 Jeanne (as Meretricious Poodleflogger) tries her hand at falconry 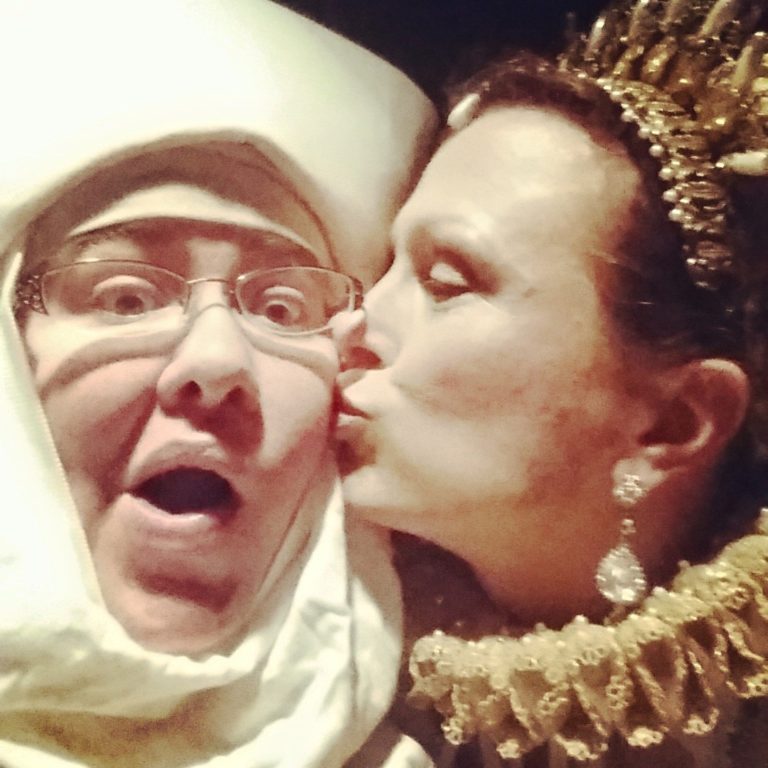 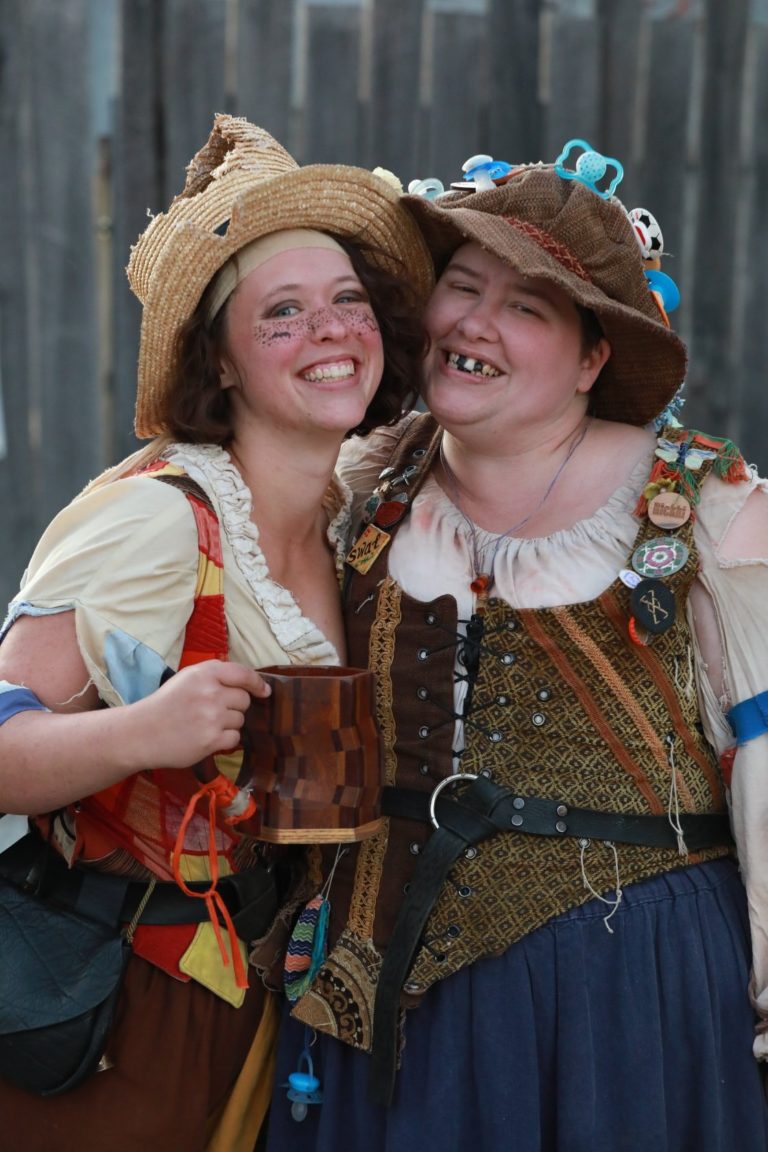 Jeanne as Meretricious Poodleflogger (right) along with Patch Havoc (left) 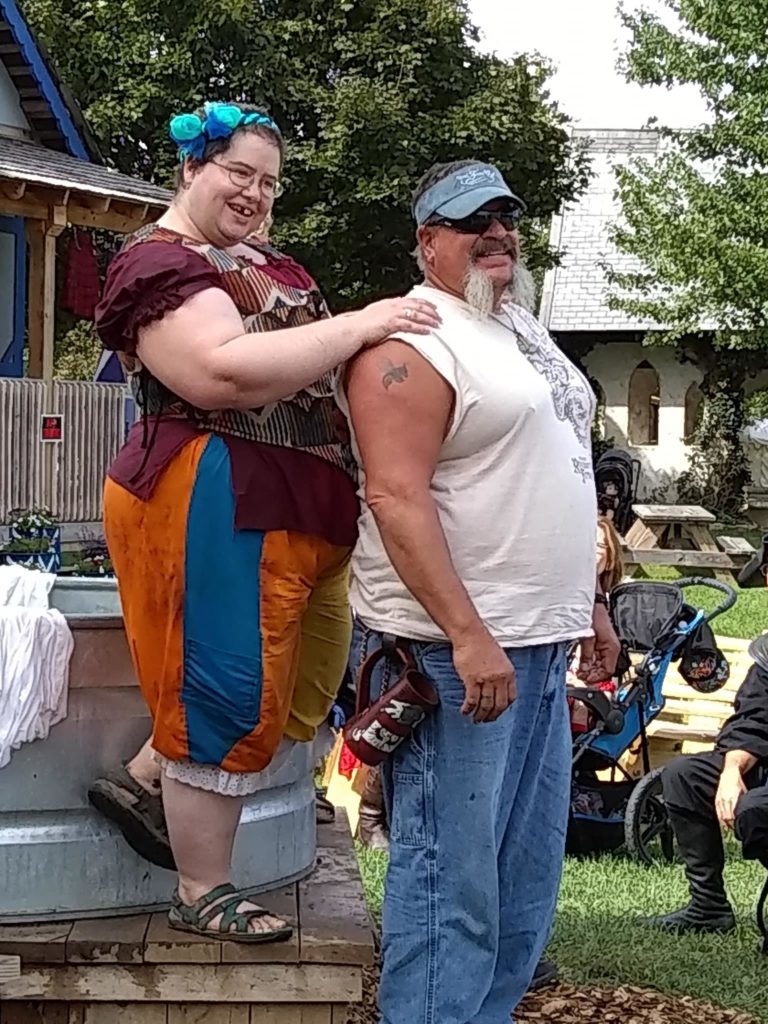 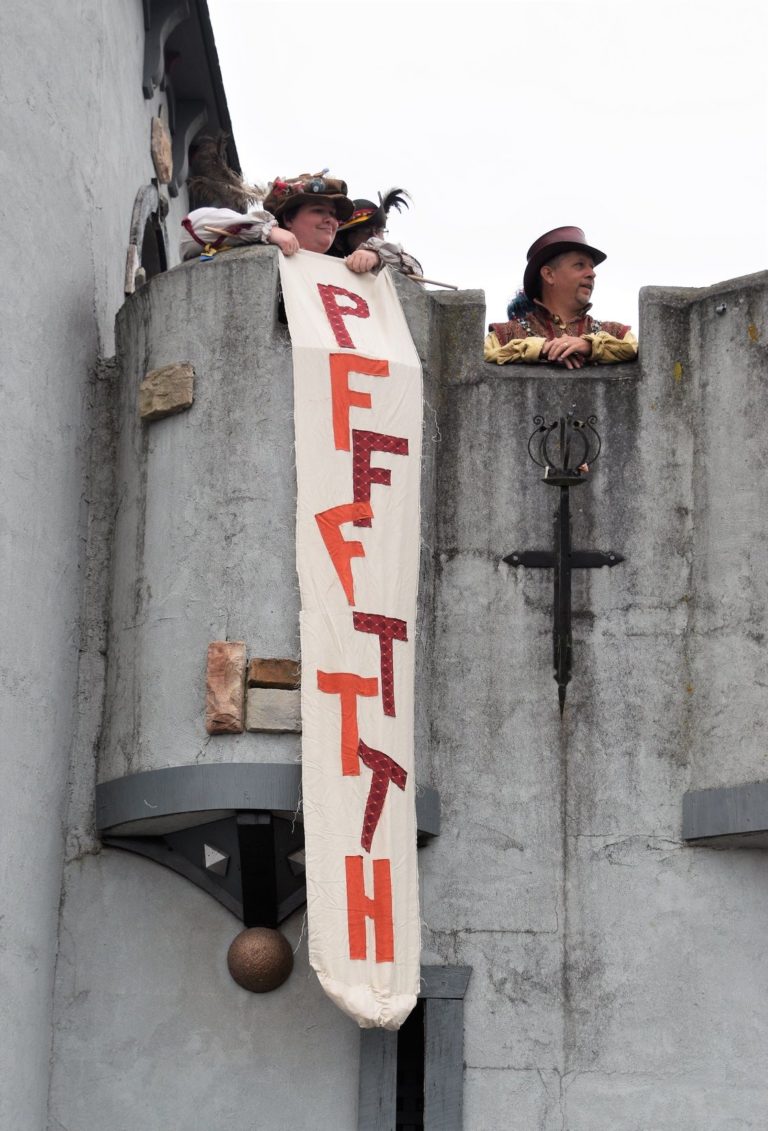