The Symbol You See Everywhere at Faire – The Tudor Rose

The Symbol You See Everywhere at Faire – The Tudor Rose 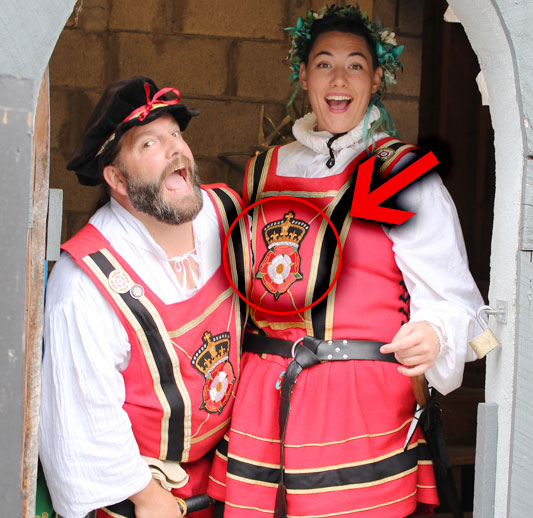 When taking a look back at the Tudor Rose, it’s important to realize the significance attached to the imagery. Heraldic symbolism is about ever so much more than just pretty pictures on a shield. Encompassing rank, lineage, politics, and accolades a family’s Heraldic design tells a story, allowing those who witness it to discern immediately who they are dealing with and what kind of power they have behind them. It is almost a language in and of itself. While the artistry predates written history, heraldry began to find formal acknowledgment around the12th century during the early Middle Ages. It developed over the following centuries, with many signs rising and falling along with the families they represented.

Each country has its own traditions regarding these coat of arms, including who has the right to bear these standards depending upon their place in the family. It is a complex system often recognized only by the people themselves or on occasion by those obsessed with the study. Since I am neither of those, consider this to be sort of a drive-by study of one of the most famous heraldic symbols, the Tudor Rose.

A rose of vibrant red nestled in among the leaves, protecting a second rose of pure white as they stand out with clarity in any surrounding. The Tudor Rose is the heraldic emblem of England and features on the 20 pence coin (1982-2008). It stands out on the badge of the Supreme Court of the United Kingdom. It can be found on multiple royal portraits throughout history (specifically the Tudor era), and of course, liberally decorates any renaissance festival declaring itself to take place during the Henry or Elizabeth years. Though many people recognize the symbol on sight, many still don’t know about the bloody century of civil war that had to be endured before the houses of Lancaster (red rose) and York (white rose) could be joined together and begin the Tudor dynasty.

If you want to delve into the wide, wide world of historical controversy, ask aloud in a room full of historians, “What began the War of the Roses?” Also known as the Hundred Years War, it was comprised of roughly a century of power struggles and claims to the throne of England between the elite nobility, the main two houses of which were that of Lancaster and York, both of which could claim descent from Edward III (1312-1377), who had the poor taste to have seven sons and five daughters, creating a massive bloodline of future presumptive heirs.

The Earls of Lancaster were a branch of the Plantagenet (a royal house of England) family whose descendants include Henry IV, V, & VI. Their established bloodline, while hotly contested, passed on it’s claim to the English throne through to the Tudor Dynasty, established by Henri VII. Henry IV (1377-1397) was the first of the Lancaster’s to sit on the throne, having deposed of Richard II. This established a line of kings for more than six decades on through Henry V and VI. The Lancasters had power, strength, land, and wealth, everything it took to make an ambitious Earl into a fairly steadfast monarch. This was proved when even after a civil war and divided factions, the throne was returned to their control in the hands of Henry VII.

The House of York

Like the Lancasters, the York’s were the descendants of the Plantagenet royal house. Through younger sons of Edward III, they too held some small claim to the throne of England. They pressed their advantage, and in turn provided England with three kings, Edward IV, Edward V and the much-maligned Richard III (1461-1483). Having usurped the throne from his nephew Edward V, he was in his turn usurped by Henry VII. It was Henry VII’s marriage to Elizabeth of York (Richard III sister) that finally resolved this conflict for certain.

Like all wars, everyone had their own ambitions and reasons why they were involved. As with any political infighting, there was a fair degree of alliances, back-stabbings, exiles, and executions. This resulted in a period of immense political strife during the mid-late 15th century. To be blunt, the country was in anarchy. A combination of brutal dictators and endless civil wars had left them all but bankrupt, and as the Lancaster’s had heavily occupied the throne since the mid 13th century, the air was ripe for a new king to assume control. While the civil strife had been going off and on for some time, this kicked off a period of heavy infighting. The result of which was the Yorkist allied Richard III (1461-1483) being deposed at the Battle of Bosworth Field by the Lancastrian allied Henry VII (1457-1485). Aware of the tensions still bubbling away in the pot, Henry made a wise choice and married Elizabeth of York, uniting the factions and establishing the Tudor Dynasty.

The House of Tudor

Something that strikes me as funny is the reality that Henry VII just barely had a claim to the throne at all. The bastard child of the third son of Edward III, it was a papal bull and a confirmation of Parliament that gave him any sort of a stepping stone to what would become England’s most famous dynasty. Henry VII was an uncompromising king. He had proven himself a fit commander when his army defeated the Yorkists, and after decades upon decades of brutal civil war which left a country bankrupt, he showed himself to be a shrewd businessman and conniving politician. His marriage to Elizabeth of York not only cemented any alliances to be had but ended any dispute regarding who would have claims to the throne after his death.

The Tudors resulted in a line of five monarchs; Henry VII, Henry VIII, Edward VI, Mary I, and Elizabeth I. The Tudor Dynasty lasted from Henry VII’s assumption of the throne in 1485 until the death of Queen Elizabeth I in 1603.

The symbolism of the Rose

Through marriage, the Tudor rose was meant to end the conflict between the houses of Lancaster and York, unifying England under a single banner. While it’s symbolism would seem clear, with the larger red rose of the victorious Lancaster’s surrounding the smaller rose of the York’s, I think there is more to discuss here than just the obvious.

A red rose in the modern day is a declaration of love and passion. I find it difficult to think of dour Henry VII as a romantic! The red rose of Lancaster was known as the apothecary’s rose and was one of the first roses to be cultivated in Europe.

The Lancaster’s use of it is linked to the gold rose utilized by Edward I (1272-1307). Members of his family utilized roses of different colors to show their link to the current king. However, it should be duly noted that there is debate as to whether or not the red rose was heavily used before Henry VII assumed it. Given it’s connection to Edward I, I wonder if it was another of Henry’s canny powers of one-upsmanship to legitimize his claim over the Yorkists to choose such a bold declaration of his bloodline.

Today the white rose symbolizes feelings of purity and innocence, even of love in the platonic sense. The white rose of York had more religious connotations, being heavily connected to the Virgin Mary. This heraldic symbol goes all the way back to the 14th century and the 4th surviving son of Edward III. Catholocism was, of course, the dominating religion of Europe at the time and would remain as such for many centuries to come. Declaring one’s loyalty to the church was advantageous as well as practical.

By placing the soft white rose within the dominating red rose, you see clearly who is the controlling force in this unification. It’s manifestations continue into the modern era, where it has remained an emblem of England’s monarchy and the royal family. It is such a ubiquitous part of the royal family that it has been altered and added to depending upon the wearer to declare their connections to the royal family of England. It is a subtle and prestigious form of propaganda that has lasted down through the centuries. Even into the American renaissance festivals.

The Tudor Rose at The Ohio Renaissance Festival

With most ren faires taking place during the mythologized reigns of Henry VIII or Elizabeth I, it should be no surprise that the Tudor Rose is a staple of it’s pageantry. The Queens’ guards (Beefeaters) are shown wearing tabards with large roses declaring their agency as Her Majesty’s protectors. The cast of ORF has badges with a shining rose standing out to let you know who they are.

St Peter’s Church on grounds has wooden plaques with the Tudor rose to oversee couples exchanging their vows! Each one is a special reminder of how the Tudor’s came to power and how their history still affects us all these years later.

If you are up for a wiki deep dive, so research this for yourself and discover more about the fascinating history of England’s royal families!

Next Week: Book Review – The Hidden Lives of Tudor Women

Tuesday, December 17th, we will be diving into this facinating read.

The War of the Roses – Encyclopedia Britannica