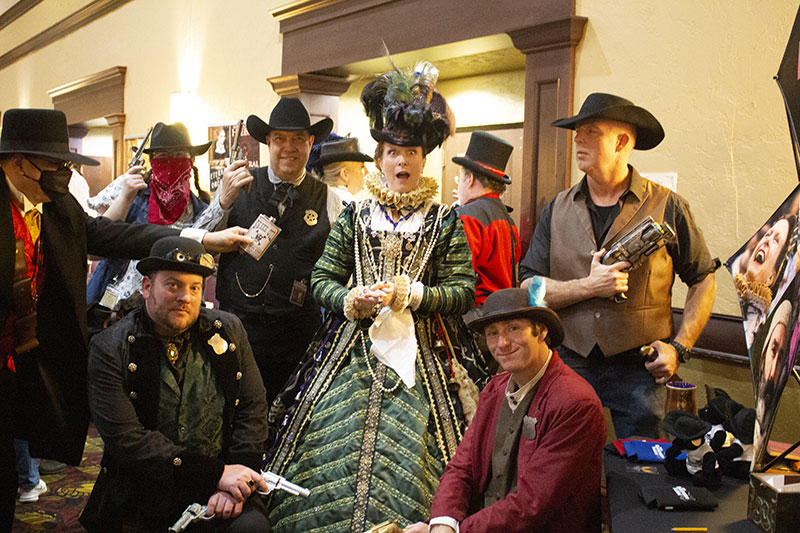 Every year, as the winter veil slowly begins to draw back and makes way for sunny days ahead, I find myself geared up for event season once more. I ache to get out of the house and have an adventure with a couple of my fellow Rennies as we begin the long march towards Celtic Fest and the Ohio Renaissance Festival. This year that opportunity came from the 2022 Steampunk Symposium in Cincinnati!

A blend of Victorian history, steam-powered innovation, science fiction, and eldritch foreshadowing Steampunk is one of the more spectacular aesthetics within the geek community. Steampunk occurs with a re-imagining of the rule of Queen Victoria (1837 -1901), where a time of scientific innovation, colonization, spiritualism, and artistic creativity was on the rise. A fascination with steam-powered creations becomes married to the rise of otherworldly activity, culture clashes, and discovery as the world changes before your very eyes. The genre is immense, offering a backdrop for everything from novels to tabletop games, fashion shows, and music, and Steampunk Symposium was the perfect place for me to learn more.

The adventures of Queen Elizabeth I through time and space

The first place I had to hit was the table for the Ohio Renaissance Festival! ORF has been a long-time sponsor for the Steampunk Symposium, helping them to put on this fantastic convention. Our very own Queen Elizabeth I was present to give out plenty of con swag. There may have been a bit of a kerfuffle with the law as she was arrested for crimes against the timestream! Her Majesty made bail, but word has it she might have slipped off with a ray gun or two. You didn’t hear that from me.

As an aside, the jail cell at Steampunk Symposium was a fundraiser event of NAMI (the National Association on Mental Health). Please consider donating.

Opening ceremonies kick off the mystery

Opening Ceremonies were not to be missed. After a two-year hiatus, the crowd was raring to go, packing the hall to see what was in store for this year’s event. Following the Symposium’s theme of “Weird West”, we were transported to Paradisio Falls, a sleepy town full of good, salt-of-the-earth folk with no terrifying secrets whatsoever. A flirty performance by Madame Gigi’s Outrageous French Cancan Dancers kicked things off, only to be interrupted by Paradisio Fall’s very own Mayor Slayer who took the stage to assure us that the town has been zombie free for 10 years now and there was nothing to be worried about. If we heard different it was naught but slanderous lies by his political opponents. Assured of our safety, the ceremonies continued with announcements about panels, special events, and this year’s charity NAMI, the National Alliance on Mental Health. The Nülydedz rocked the stage, giving a special performance before the ceremonies ended and we headed off to our first presentation. Here are a few of the highlights from the weekend.

Workshops & panels are some of my favorite parts of cons, but then I’m a nerd like that. Diverse Perspectives on the American West & Penslingers and Gunslingers: Tenacious Women of the Wild West, moderated by Dr. Renea Frey were my personal favorites. I remember watching John Wayne and Clint Eastwood with my granddad, forming this idea of the good ol’ cowboy who ‘tamed’ the savage frontier. This round-table discussion set itself to examine that, centering around our perceptions of the wild west as fueled by both modern media and our own implicit bias. We see the west as being colonized from a hypermasculine perspective that often overshadows the historical reality of the women, BIPOC, and lgbtq+ folk who had a massive contribution to the settlements. It was a wonderful conversation to start off with and I thoroughly enjoyed hearing different perspectives on how we were taught to view the old west vs. the historical reality.

On the Upper Terrace, we were treated to the Steampunk Rodeo, a free obstacle course for anyone and everyone willing to straddle a hobby horse and try their aim with a NERF gun. Many people came with their personal homemade mounts and took the competition by the reins, making a show of whoopin’ and hollerin’ as they rode around barrels, jumped (or carefully stepped) over the stands, and did their best to shoot foam darts at tin cans before playing horseshoes with rattlesnake poles. Winners were selected for best completion time as well as the best-decorated hobby horse, giving the event a delightful show. It reminded me a lot of the Watermelon/Pumpkin War we feature at ORF!

Spiritualism took hold during the Victorian Era, bringing about many of the concepts those of us interested in the subject believe in today. Whether you count yourself a believer or a skeptic Ghosts, the Victorians and Us presented by Leanna Renee Hieber proved well worth the hour spent. The panel centered around how the belief in spirits became ingrained during the time and what effects this had on the predominant culture. Colonialism led to soldiers dying in foreign wars, leaving families without knowledge of what happened to their sons and without closure. Mortuary practices were going through a period of experimentation that took the care of the deceased away from the family and behind closed doors. Exploring these changes had a massive effect on how we view death and the dead and the way this encouraged the practice of spiritualism to become a cultural phenomenon.

The mayor was wrong

Speaking of revisiting the dead, it seemed Mayor Slayer wasn’t entirely honest with us about the potential of a zombie infestation! All throughout the Symposium, you had to watch out for folks in undead makeup roaming about as they searched for brains. If you were caught, they politely challenged you to 3 rounds of Rock, Paper, Scissors to see if you would become their next victim. If you lost, you could head over to their Zombie table for a few scars and discoloration of your own before joining the hunt! It was a fun way to become a part of the festivities and while I didn’t get caught personally I saw an increasing number of people wandering around with zombie makeup from Saturday morning to evening.

All for a good cause

The Symposium’s featured charity this year was NAMI, the National Alliance on Mental Health. NAMI offers resources and outreach for people dealing with mental health concerns and illness, providing a community of inclusive support for a better life. A lovely raffle was hosted with donations from vendors and con attendees alike which offered up a wide selection of professionally-made goods and services for anyone who wanted to drop a ticket in the jar. ORF does something similar with the RESCU rally every fall so I was more than happy to grab a couple of tickets and contribute. Much to my surprise I actually won a handmade vest from one of the seamstresses!

What better way to end the evening than with a panel on Cults, Communes, and Secret Societies? The topic of Victorian Era cults was presented by Greg Pizzino, giving a glimpse into the philosophy and rhetoric behind some of the more famous (or infamous) cults and communes of the Victorian era and what led to their downfall. (Psst, the answer is racism, lack of funding, and free love). It’s fascinating to talk about how these ‘personalities’ gain so much influence over others only to watch it crumble. It’s even a little scary to know how many started out with what sounded like reasonable ideas that suddenly took a sharp left turn. Makes me wonder what sort of cults existed during the renaissance era…

Your steampunk ensemble just isn’t complete without a ray gun to finish it off, so how could I miss Larry Brown’s Building Metal Ray-Guns from Thrift Store Finds. The workshop was wonderfully practical and hands-on, giving multiple examples of his builds that go far beyond the spray-painted NERF gun and into some truly original and artistic works. Mr. Brown likes to add a bit of flavor to his weapons, referring to them with inventive titles such as ‘subatomic ion destabilizers’ that could stop a Tyrannosaurus at 300 ft. While we got a close up look at his work, our presenter took a random box full of lampstands, bolts, candlesticks and the like, turning it into the basis for a solid prop. We got to take home a few bits and baubles ourselves and I am dying to get started on my own build!

Fashion is a big part of the steampunk community, leading to a Fashion Show that allowed both vendors and attendees to show off their garb on the runway. Queen Elizabeth 1st herself was invited to head the panel of judges as the runway got hot with stunning head-to-toe looks that ranged from elegant women about town to stagecoach bandits. Everyone who has read my blogs knows I am a garb collector so I was enraptured with both the hand-sewn looks and the ones built up over time. The winner of the show was a lovely woman in a perfectly matching handmade ensemble of black stripes and purple accents who got an extra turn on the runway to strut!

We saw so many familiar faces from ORF and even got to make a few new friends who I hope will find themselves in the village come September. Steampunk Symposium ‘22 was a fabulous return to the event season that left me hungry to see what they are going to do next year. 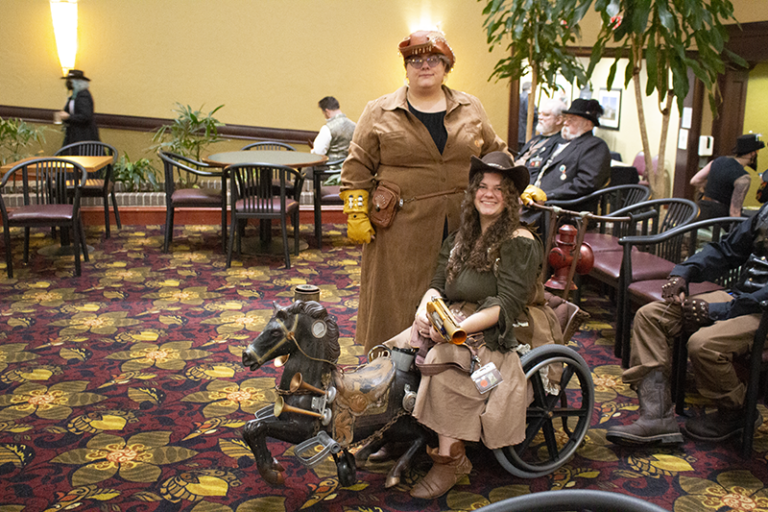 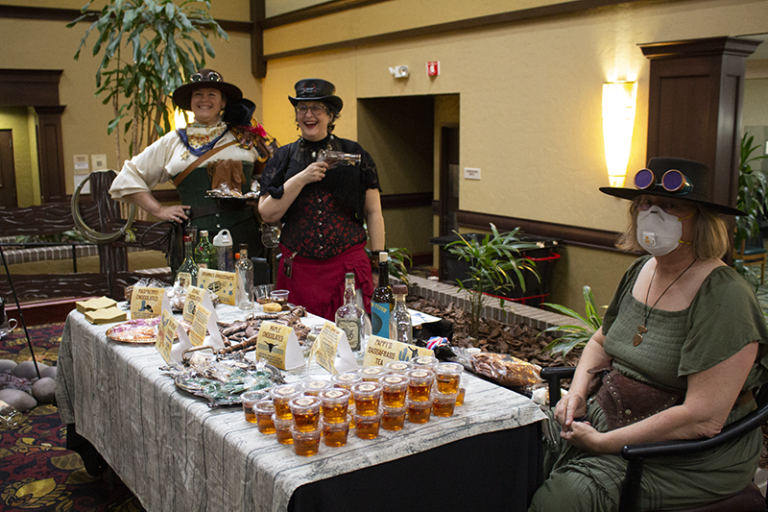 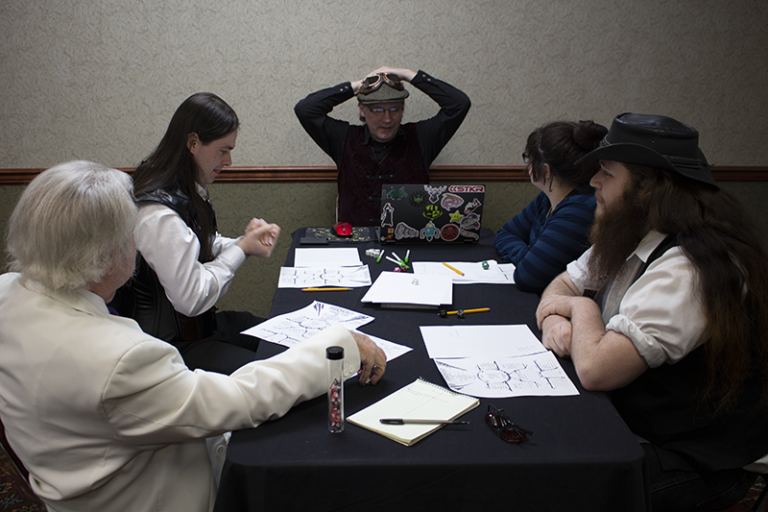 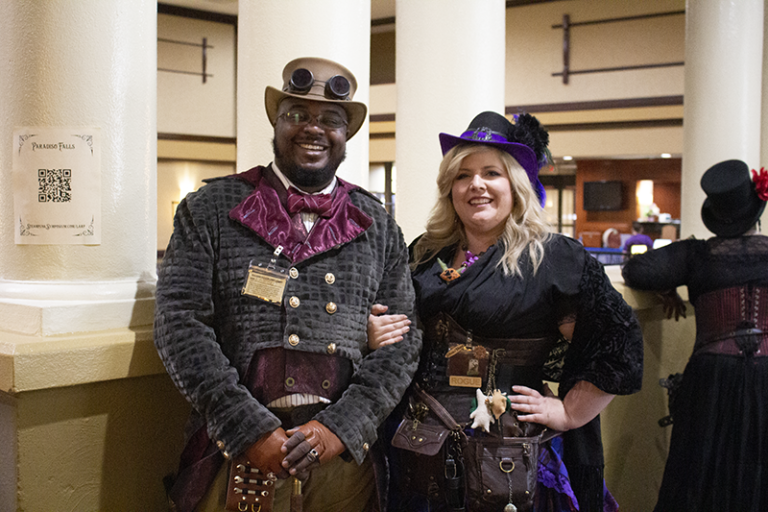 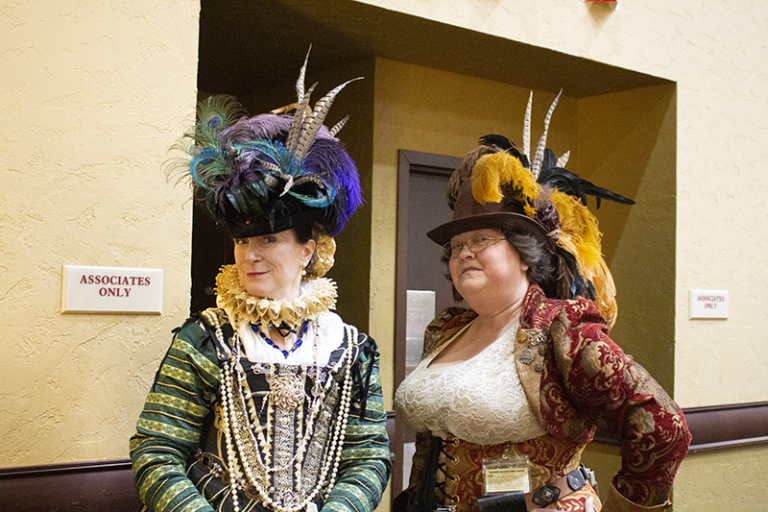 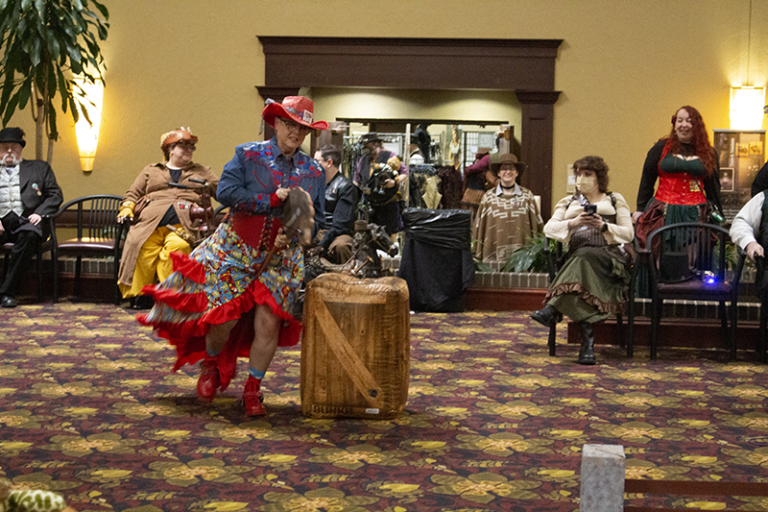 Brimstone Haunt was at HorrorHound Con this weekend! Check out their Instagram for more scares!