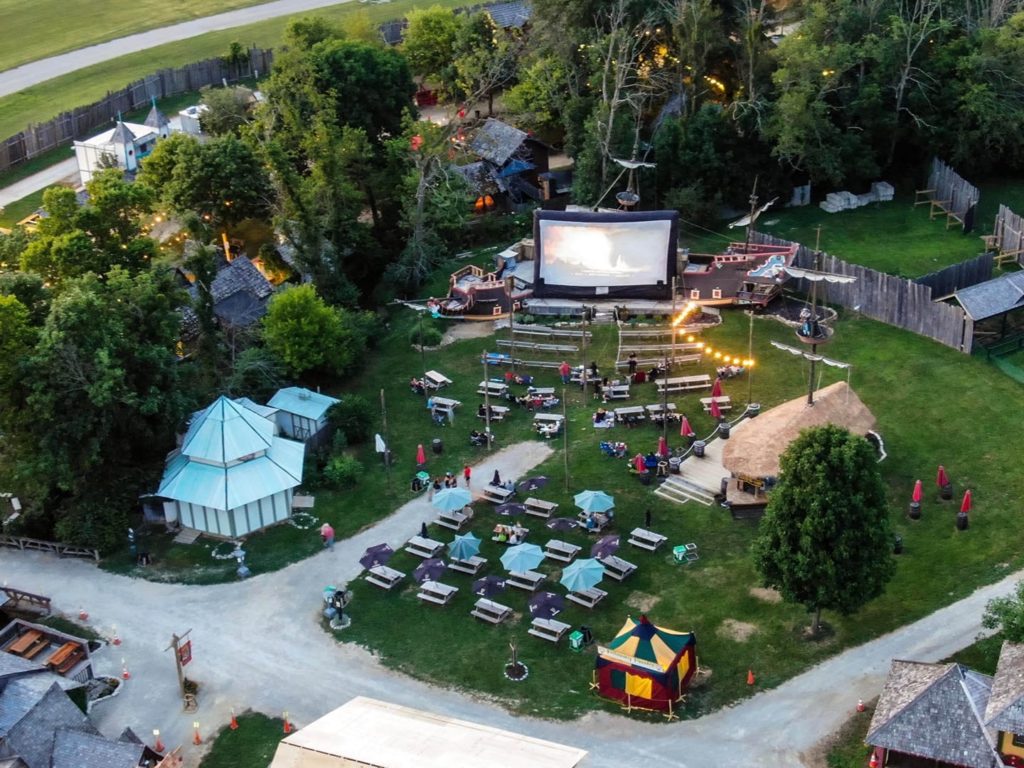 I’ll take any excuse to head on over to faire and spend the evening hanging out. So it’s all the more fun when Renaissance Parks gives me a reason to do it. Friday Night Flicks are back on the big screen until the start of ORF, bringing you the perfect end-of-the-week treat for a family night out. There were kids running amok with the fireflies while their parents had a chat in their fold-out chairs. It was a wonderfully cool night, which if we get lucky will hold for a while. I don’t know about you, but I’m getting very tired of keeping my air conditioner on all the time.

Their first feature of 2021 with A Knights Tale, one of the most underrated classics of the early 2000s. Art is subjective, as is this take on The Canterbury Tales by Geoffrey Chaucer, but this movie has gotten a lot of attention in recent years and has remained a favorite of what could be dubbed the ‘faire prep’ movie list. Every time I watch it I am reminded of just how deeply satisfying the payoff is and how much I love Rufus Sewell play such a despicable villain. It was one of the first in a trend of ‘modernized historical’ movies and tv shows that blend ‘history’ (and I’m being generous using that term) with modern elements and design for an unusual take on the subject matter. It paved the way for the likes of Marie Antoinette and even Bridgerton and I am utterly here for it any time it’s shown.

Watching this got me thinking about what other movies we could include in that vein. There are plenty to pick from and I’m sure everyone could draw up their own preferences. But a few stand out with clarity as media works that garner the most discussion and are frequently utilized as inspiration when building up to the opening gates.

Lord of the Rings (2001 – 2003): Do I even need to explain myself here? I know Amazon is planning to do a re-imagining of the works of Tolkien and while I remain interested in seeing how it turns out, nothing will ever compare to the LotR I was introduced to. All I need is the hear the intro narration from Cate Blanchette as Galadriel and I am invested for the next twelve hours. Why twelve? Because in this house we watch the extended editions or nothing at all!

Muppet Treasure Island (1996): Yes, I know. It would be oh so easy to mention a certain quadrilogy of pirate movies we’ve all seen, but Muppet Treasure Island is by far the one that speaks more to the root of ren faire as singing, dancing, all-out spectacle. It has fun with the source material and branches out for the audience to have fun with. And come on, it has Tim Curry. What more of a reason do you need?

The Princess Bride (1987): This movie is so entrenched in popular culture that when there were rumors of a remake people about lost their minds until they discovered it was the original cast along with a selection of celebrities filming the entire thing from home during the pandemic in order to benefit World Central Kitchen. I don’t think a year goes by where I don’t see this movie at least once between May-August and I am certain I am not the only one.

Labyrinth (1986): If you love your fantasy extravagant with a heavy dose of fairy lore and David Bowie, which let’s be honest, who doesn’t, then Labyrinth is on your list. It’s so easy to throw yourself headfirst into the delight of this film along with a generous coating of glitter. It remains an inspirational work for everyone and has only gotten better with age with its storytelling and mythic premise.

Robin Hood: Prince of Thieves (1991): I can still remember the theme music from this film and I was only six years old when it hit theaters. It kicked off my Alan Rickman phase (1946 – 2016) for years to come and paved the way for a whole generation of people to become obsessed with archery. Looking back it never struck me as odd that out of the entire cast, Kevin Costner and Christian Slater could apparently not do an English accent to save their lives but now it stands out every time I give it a rewatch.

The Last Unicorn (1982): This was one of the Rankin/Bass animated films that popped up during the ’80s along with The Hobbit and Flight of Dragons. Looking back it was one of the more ‘adult’ animated pieces, not because it was inappropriate but because it dealt with more mature themes which wouldn’t always make sense to younger children. It had a beautiful sorrow to it and I continually go back to indulge in the romanticism of the film.

Dragonheart (1996): Don’t act like you didn’t cry. You know you did. We all did. I have a special place in my heart for movies that talk about fallen knights and the road to regaining their honor. Throw in a dragon voiced by Sean Connery and a thoroughly enjoyable Dennis Quaid riffing off one another and it’s basically a bro-comedy with swords. It’s a solid movie with some real love behind it. Perfect for a warm-up to the faire mood.

Excalibur (1981): Several of these movies could easily be identified as camp, but Excalibur took itself just seriously enough to walk that fine line between humor and drama and keep it legitimately entertaining the whole way through. Nicol Williamson (1936 – 2011) was the stand-out performance of the film and to this day I remember how he took over the scene any time he appeared in it. If you’ve never seen this movie please do yourself a favor and give it a watch. You will not regret it.

Dungeons & Dragons (2000): I will not hear a single argument lobbied against this film! I greatly look forward to the movie slotted to come out in 2023 but I will always come back to the sheer chaotic joy that is this bomb of a fantasy-adventure film. This defiantly goes in the category of so bad it’s always bad but a delight to watch with friends if only to introduce them to the unbridled strangeness of Jeremy Irons at his most bombastic. If it isn’t on your pre-ren faire watch list, it should be.

Legend (1985): What was it about 80’s fantasy and spraying everything down with glitter? I’m not arguing the aesthetic, I’m just asking whose idea it was so we can thank them. Legend was one of the movies that stand out in contrast for its dark fantasy elements against the more recognized fanciful tropes of the genre. You get an early Tom Cruise, Tim Curry in horns, mischievous fairies, and a unicorn in need of saving. What more could you ask for?

The list could go on and on for as long as you are willing to keep the films rolling! What movies would you put on your Rennie Watch List? Be sure to drop by the Shipwreck Stage at ORF every Friday night in August for more movies starting at sundown. This week’s feature is The Mask of Zorro (PG-13) starting at sundown.

The Mask of Zorro