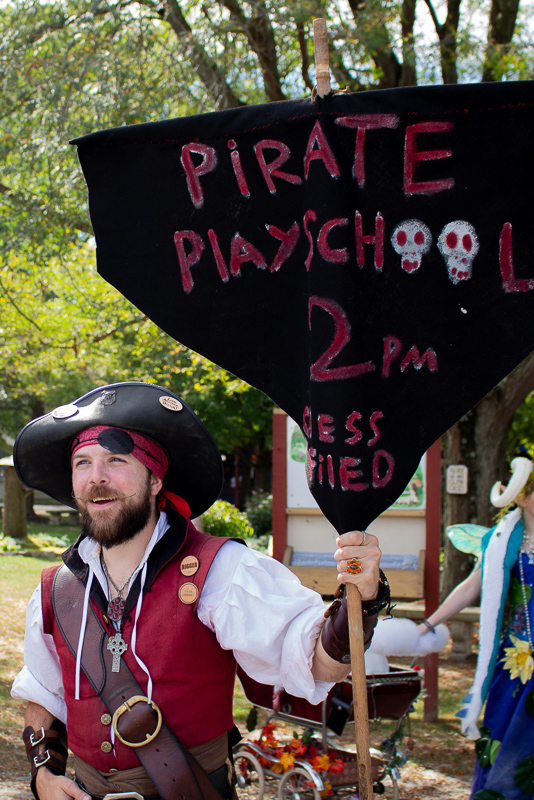 Who hasn’t imagined running off and joining a pirate crew? The salty sting of the sea air, a life spent on deck, the scurvy, the constant threat of Her Majesty’s Navy, krakens… Okay, maybe not the best lifestyle choice, but there is no denying that Pirates Weekend is one of the most popular themes of the ORF run! Pirates have always been present in popular culture. From Robert Louis Stevenson’s Treasure Island to Pirates of the Caribbean and now Black Sails, a life of adventure and plunder captures the imagination. A chance to leave behind the mundane world to seek fortune and fate among a crew of scoundrels. How could you not be enhanced with the prospect?

Why Join The Crew?

Walking around the ground for the day, I found myself at the Knotty Nauticles show, which really lived up to its name. Tongue-in-cheek humor gets me every time, and I had to have my wife take photos cause I was snickering too hard to hold the camera steady! They really pulled the crowd in, preforming fire-eating in a very up close and personal manner. I was very impressed with how they kept everyone so engaged and how quick-witted their comebacks were. I promise the ending was worth a tip in their bucket, after all, it’s not every day you get to watch a man intentionally light his nipple on fire! See them on the Revelers Stage at 11:30 a.m., 2:00 p.m. & 4:15 p.m.

Folk fall in love with romanticized ideas of the past, especially outlaws. It is difficult to imagine the true wrongs committed by these men and women and mystery surrounds them. Pirates, like most outlaws, tend to be underdogs in a fight against more powerful figures. And who doesn’t love an underdog?”

I got to chat with the pirate crew of The Chequered Chimp between all their activities to ask them why they decided to pursue a life of pillage and plunder. First Mate Jolly Rodger Rathbone let me in on his theory as to why becoming a pirate makes for such an attractive fantasy. “I think [it is] because it’s the ultimate freedom fantasy. Traveling the world, being your own person. The movies paint such grand adventures I think everyone has a passion for that life in some shape.”

No one exemplifies that better than Willamina “Will” Crowley, the Gunner for The Chequered Chimp. There was an opportunity for advancement for women as pirates that didn’t often exist on the mainland. Following in the vein of Grace O’Malley, Willamina fled a comfy life in an arranged marriage, she found her freedom on the high seas. “A good pirate is always ready and willing to help his/her shipmates (and fellow cast members),” shared Willamina.

Everybody at ORF really gets into pirates weekend, and it is a chance for the crew of pirates from cast to really shine. They hosted a special Pirates Playtime on the Upson Downs at 2:00 p.m. inviting children of all ages to enjoy rousing games like “Red Lantern, Green Lantern” and “Captain Says”. They teach the kids some truly awful pirates jokes before taking them over to the Aleing Knight Pub for ORF’s Talk Like A Pirate Contest! The winner gets to take home their very own treasure chest full of booty, and everyone gets to grab from a bunch of pirate-themed toys like eyepatches and spyglasses!

Pirate Puns: What is a pirates favorite restaurant? Arrr-by’s

I’ve mentioned before that music is at the heart of faire, and Band of Pirates has mastered the art of ‘Grog Rock’. They perform at the 3 Fools Pub at noon, 2:00 p.m. and 4:00 p.m. Their beats will get you tapping your foot while you enjoy your bbq. I’m determined to learn the lyrics to “Annabelle” so I can sing along with them. They play classics from “What Do You Do With A Drunken Sailor” all the way to “The Pirates Who Don’t Do Anything”. They’re a fabulous bunch of scalawags to listen to and I’d suggest catching their show for sure.

And what better way for adults to celebrate Pirate Weekend than by going on the Pub Crawl? Held at 12:30 p.m. & 2:30 p.m. every day of the festival, the Pub Crawl takes participants to three of Willy-Nilly’s best pubs for fun games, conversation, and of course drinking! I played tag-along to see what kind of fun they get up to and let me tell you there is nothing like watching people try to balance their drink while dancing the Hokey Pokey! I got to hang out with a really fun group, and while everyone began as strangers, I saw many of them hanging out with one another later on, laughing and having a great time. Faire finds a way to bring people together, and it’s great to see people forming their own ‘crews’ to hang out with during the day.

I get a real kick out of the garb that shows up during Pirate Weekend. People show up in their finest, bringing forth some very beautifully complex and layered looks to celebrate these scurvy sea dogs! But one of the most prevalent things to make an appearance is leather. Lots and lots of leather! This should come as no surprise. ORF has fifteen leatherworkers on the grounds, which allows for plenty of variety. I feel like leather just works with the pirate theme more than anything else. It has the aesthetic of outlaw mixed with a romanticism that makes for such a good pirate outfit. I saw a lot of people walking away today with new belts, corsets, jerkins, and hats to complete their look.

Leatherworking is one of those trades you don’t get to see a lot in the mundane world. It’s time-consuming and I think people don’t really consider the value of a good leather piece verses a plastic faux-leather substitute. I sing the praises of my custom Son of Sandlar boots up and down just because if you care for them properly they can last for decades. Most of my boots can’t survive an Ohio Winter without splitting.

I love watching the crafters work on their pieces while the crowds come by. Goblin Trader was creating a new journal cover with some beautiful tortoiseshell inserts. Brown Cow was hammering intricate designs into a belt. Watching them put so much attention into these one-of-a-kind pieces fascinates me to no end so be sure to stop by the leather booths and watch their work for yourself.

As Pub Sing took over the Aleing Knight for the end of the day, I got to enjoy a ton of sea shanties. People had clearly been taking the pirate lifestyle to heart and the pub was roaring with energy! If you have someone you wanted to meet at ORF but couldn’t find them, hit Pub Sing at 5 p.m. Everybody is there to tie one on before the end of the day! Pirates, fairies, and villagers were dancing around the pub and stomping on the tables, making a fabulous ruckus to keep the party going till last call. By the time I made it back to my car I was dead exhausted and humming Yo-ho yo-ho the whole way home. I hope everyone enjoyed Pirates Weekend as much as I did, cause Fantasy Weekend is next! Get ready for fairies, trolls, and selkies to take over Willy-Nilly!

Next week is Fantasy Weekend

All things fantastical come to life this weekend! Join the Witches of Willy-Nilly and the fairies as they enchant the village.