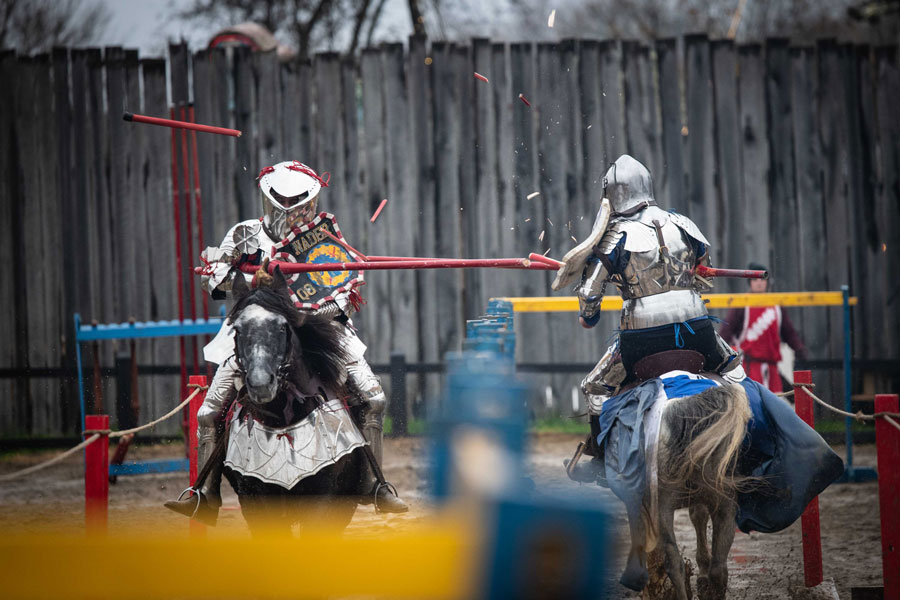 The smell of horse sweat. The pounding of hooves. The anticipation as the lance lowers. The roar of the crowd…

Every year, the Ohio Renaissance Festival hosts a jousting troupe at the Arena of Champions, giving our guests the opportunity to witness this age-old sport themselves. As the Queen takes the dais and the knights are introduced, we watch the ancient pageantry take place and get revved up for the excitement to begin. ORF prides itself on putting on a combat joust, meaning that there is no choreography and no stunt performers during this event. What you see is a full-contact, full-armored joust and every strike is as real as it looks!

There has been a great deal of speculation as to who we would bring in during the 2022 renaissance faire season. After much consideration, we are thrilled to announce Combatant’s Keep as our new joust troupe! This proud group of equestrians have formed through grit and hard work to help reintroduce you to jousting as both a sport and a historical reality. From rider to horse to squire, everyone is treated as a member of the team.

But before we get to know our new knights a bit better, let’s take a brief look at the roughly 700 years of jousting that came before our time.

The (Brief) History of Jousting

Jousting was essentially a medieval job fair. You were showing off to the local lords or royalty, proving what you were capable of on the battlefield in the hopes that they would sponsor you to fight for them.

Some may consider jousting to be the first extreme sport. But in truth, it was a far more military practice than Hollywood movies portray. It can be traced back to the middle ages when heavy cavalry was the superior tactic unleashed on the battlefield. This was not the ‘gentleman’s sport’ it would later be considered. It was warfare, plain and simple. Noble lords were required to supply knights for the combat field. Jousting was a quick way to give them lessons in horsemanship and hand-to-hand combat that would go above and beyond what the average soldier could obtain. This made knights the elite soldiers of an army.

Those who were meant to become knights usually served their father – or other recognized patron – as a page or attendant. They were usually the children of noble families, and from age seven they were relaying messages, cooking, cleaning garb and weaponry, and learning the basics of combat. It was a difficult task to be sure, but their life also included lessons in literacy, horseback riding, combat, and falconry. These were essential for a man of breeding and helped set the page apart from the rabble. Eventually, the page would follow their knight into battle as a squire, the person who cared for the weapons and shield during the campaign. Once he was judged proficient in all required skills and the money was available to purchase his armor, horse, and equipment, knighthood could be attained.

Over time, jousting became a subject of entertainment as well as military training. Tournaments were held as far back as 1066. In the early competitions, hundreds of knights could be found fighting at once with the goal of defeating their rivals, holding them ransom, or even taking their armor and horse as a prize. These tourneys could be just as lethal as war, and injury or death was not uncommon.

Once the courtly ideal of chivalry blossomed (and with it, the romantic notion of knights as valorous heroes) jousting became a more formalized sport. Those involved were expected to uphold certain standards of honor. The fantasy of the knight-errant, or the young nobleman seeking to prove himself through great deeds of heroism, became popularized around the 1400s. This is also when the idea of jousting began to turn from lethal combat to popular sportsmanship, in which the death of your opponent was disagreeable, if occasionally unavoidable.

Jousting would remain a popular sport among everyone from peasants to kings. Henry VIII (1492 – 1547) had a noticeable presence in the lists until suffering a severe injury to his leg that would plague him for the rest of his life. But after the invention of firearms, the necessity of hand-to-hand combat slowly diminished. So too did the need to devote training and resources to mounted, blade-wielding combatants. By the mid-17th century, jousting was a thing of the past and seemed determined to remain so as progress left it behind.

At least, for a while.

In the 1970s, jousting revived itself right alongside the emerging renaissance festival culture. Talk about great timing! There is a great deal of variety in the modern incarnation of the sport. Some venues, such as Medieval Times, prefer the stylistic approach of a choreographed show for the guest’s entertainment. Others have rebuilt jousting into a formalized sport with teams and tournaments. Some meet in the middle, providing both a spectacular show as well as dedicated fights to get the crowd’s blood pumping. And while it has not yet been recognized as an Olympic sport, a petition was launched by English Heritage in 2016 to officially put jousting on the line-up. Who knows, we may yet see this ancient clash of athleticism come to popularity across the world!

Thomas Nader, also known by his stage name Tanoose, had been a part of ORF since its very first year, although back then he was coming in through the front gate as a guest. He remembers this place when it was practically an empty field with no trees and only a few small buildings. But his love of performance came much earlier when he reconnected with his mentor from the entertainment world during his college years. They became a part of the Ohio Renaissance Festival on a more official level in the early 1990s, even helping build the original Gloriana stage from back in the day. Soon enough, Tom auditioned as a pirate, making him a part of the yearly cast. As his skill and historical knowledge increased, he decided to take some time off to form the kind of jousting troupe he wanted to see; a blend of sportsmanship and history that offers a new opportunity to truly appreciate the sport.

Combatant’s Keep includes a roster of folks with incredible skill and drive, like Squire Kasia Burroughs, who is currently in training to become a knight. Though she hasn’t donned her armor yet, Kasia’s resume includes training horses for Olympic sports, so you can bet she’ll be a beast in the saddle. Fellow squires Mary Neill, Cassidy McMullen, and Christian Dr. Xavier are all responsible for putting on the knight’s armor and maintaining the list during the joust. Be sure to give them a cheer for all their hard work.

Tom and his fellow knights; Patrick Neill, Samuel Ryals, James Fortner, and Ken Mondschein can be found putting each other through the paces! As the opening of the season draws closer, every practice session counts. While attending one of their training sessions, we found it heartwarming to see how well they communicate and work together, bringing out the best in their fellows.

For Tom and his troupe, this is about so much more than clashing in the lists. Their team is dedicated, putting in the hours to make this year’s joust something truly spectacular. And it all starts with the horses.

“What’s the right horse to joust with? One that will do it.” Tom explained to us as we talked with the group during one of their practice rounds. They put a lot of effort into finding the right kind of horse to work with, and it all comes down to two traits: Honesty and Bravery. “Hollywood had taught us that horses should act like automatons. Horses are not robots. They’re our teammates. You give the horse an opportunity to choose what it wants to do. Some of the horses we’ve rescued aren’t suited to the lists. When that happens, we re-home them where they can be happiest.”

Every knight on the team has spent years on horseback, both on and off the joust field. They take time to ensure the horses are up to the task, bringing them on the faire grounds early and often so they can get used to the environment. Some of the grounded ones, like Maggie, have been around for twenty-two years and can’t be frightened by anything. Others, like rookie Jewel, are still a bit insecure and need time to acclimate to the new sights, smells, and sounds before they are ready. Each horse is very much its own person, and their rider has to treat them accordingly.

Maggie is the old hand at all of this. Despite all attempts to retire her into a restful life, she is determined to stay in the list and becomes quite sassy if the opportunity is denied! A clever mare who has a special relationship with her jouster, keep an eye out for Maggie, cause she’s coming whether you like it or not!

Smokey is the definition of “gotta go fast!” Light on his feet and quick as a whip, this sweet gelding is a streak of gray when he gets moving. Don’t let his size fool you, Smokey is as tenacious as they come and excited to enter the arena.

Jewel may be the baby of the group, but as she finds her footing her personality comes out. If she doesn’t feel she is being given her due she will quite literally stomp her hooves until she gets it!

Silverado is the buff fellow who acts like a stallion. But it’s all bluster once he’s got the right rider on him. You can hear him coming a mile away, yet there’s a sweetheart under all that bulk who loves cookies (horse biscuits) and attention.

Pita stands for ‘pain in the…butt.’ A spirited horse who likes to get their own way, Pita is nonetheless a darling who does their best work when the audience is watching. So be sure you give them a big cheer!

Be sure to catch Combatant’s Keep at the Area of Champions during the Ohio Renaissance Festival 2022!