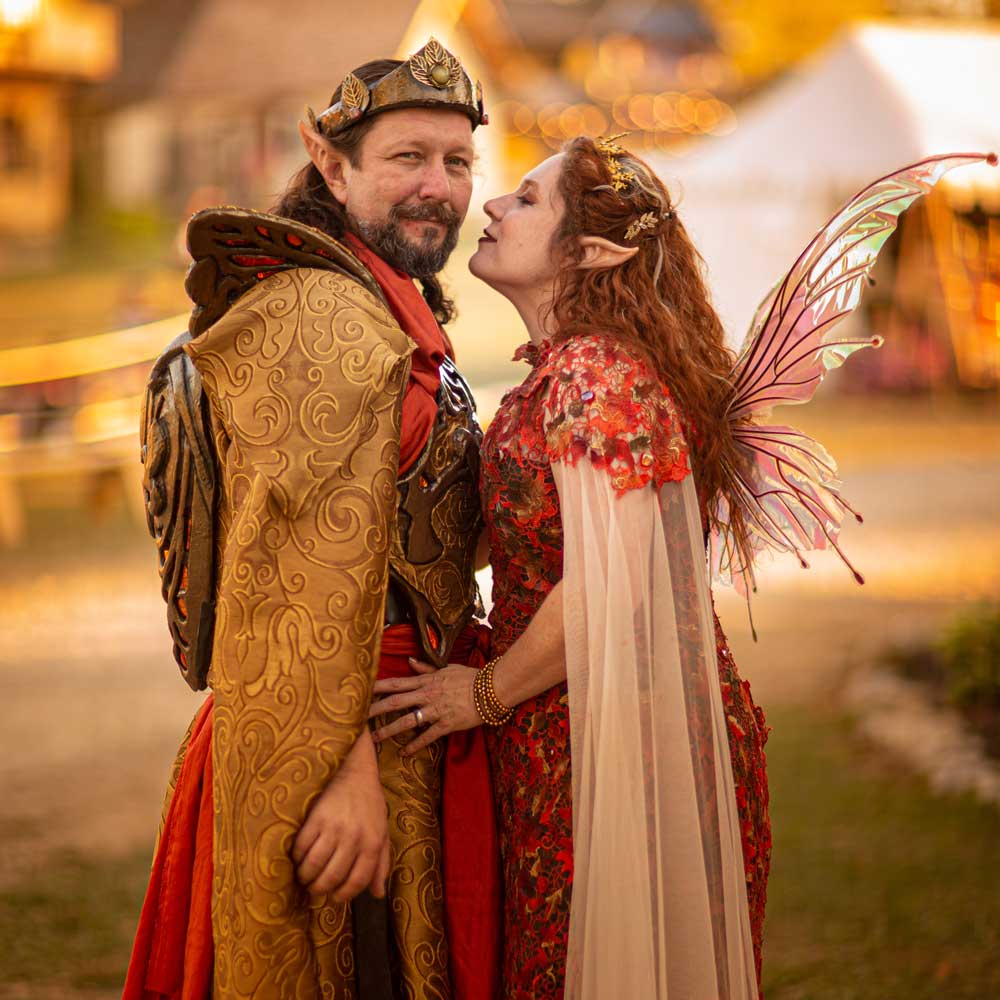 Come away, O human child!
To the waters and the wild
With a faery, hand in hand,
For the world’s more full of weeping than you can understand.

You may see them around the faire, flitting back and forth with wings made of sunlight and dreams. You may encounter them with crowns of gold and silver and ears longer than a human hand. You may find them with dragons on their shoulders, eyes of violet, and flowers growing from their hair. You may find them wherever you look, the fae folk of the Ohio Renaissance Festival.

The cast itself has its own troop of the fae, the Fairies of Willy-Nilly who visit from time to time to play with the mortals. But today we’re going to focus on the fairies who are not on cast but are part of a loose community that gathers around the festival every season. They are all led (as much as anyone can lead a fairy) by the officially-unofficial heads of the group, High King Oberon and High Queen Titania of the Summer Court.

A Letter From High Queen Titania

It has come to my attention that some are wishing to have the Royal opinion of the comings and goings of the faerie activities and dealings with High King Oberon and myself, High Queen Titania of the Summer Court.

The short answer is we enjoy it.

But I know there will be an uproar if I leave it at that. So here, gather round dear and kindly mortals and I shall endeavor to enlighten you as to why my beloved husband and I spend time there amongst you all. Some time ago, my lord approached me with the notice of travel. Which I do so enjoy. He spoke of a place where the morals were quaint and there were inklings of our kind creeping around the fields and the small village. He felt they might be in need of some guidance. I, knowing full well that was a lark on his part, guidance is something he loves to give when the mood takes him…often with a drink and a cheery atmosphere, for these things go hand in hand. He also further enticed with me with talk of a festival that would be advancing on the village, near the end of our seasonal reign. What better way to celebrate the end of our yearly duties than with a merry time spent among the people?

I could hardly object. Our first excursion was one of stealth. Yes, I can hear your collective gasps from here, but hear me out, we didn’t wish to cause undue fuss or alarm. We were still unsure of how our appearance would affect the general populous. Humans can be just as fickle as fae at times. We attempted to “blend in” to use a human phrase. But as anytime we try to mingle with humans, things have a way of not going as planned. We did, however, enjoy ourselves greatly and decided to visit again, and again and again. The village has quite grown on us. And as often happens anyplace we spend a significant amount of time in, the fae tend to creep out of the forests and start to play with the humans.

There are faeries everywhere, mind you, my lord, and I tend to make them feel more emboldened to be more visible, as it were. Humans can be such fun to play with; all that music, laughter, and merriment, why it just draws faeries almost as well as milk and honey! As time has passed, many a faerie has walked the village proper and played in the fields at Willy-Nilly. It has been my great pleasure to meet them all, and occasionally settle disputes and merit justice to some pesky humans now and then. While the faeries are in my jurisdiction, I really am there to relax until I relinquish my rule at Samhain to my elder sister, Queen Mab, until the following Beltaine, but we will deal with squabbles with they arise. As long as they are conducting themselves as proper faeries should, I have very little in the way of concern on their day to day interactions with humans, but I do try to remind them that they need to serve a role in humans lives. The ones under the age of reason must be reminded that there is magick in the world. And what better to remind them of that then the living embodiments of nature and magick?

Creating Your Own Fairy Persona

You may have noticed an uptick of folk who are interesting in living their best magical life. There have been a number of videos and mini-documentaries talking about people who spend their efforts crafting the ideal mermaid or fairy persona and what that entails. There are magazines and even conventions dedicated to the growth of the community. There are countless makeup tutorials on youtube, places to buy wings on Etsy, and clothing retailers who will help you perfect your fae look. But becoming a fairy goes much deeper than just the aesthetic. It is about crafting a persona that you can ‘shift’ into, allowing yourself to enjoy the mercurial nature of their world.

Names are fantastically important to the fae folk. So much so that you would be wise not to let them know yours. Names are power, and if a fairy knows your true name they can use it to have sway over you. For this reason, many people use a pseudonym or a nickname when speaking to the fae. But fairies often use an alias as well to maintain their independence. It would be smart to look to the natural world when finding a suitable name – such as Mothdust or Starlight – or go completely wild with your chosen name – such as Habreon or Kelvilar. Make your name as fantastical as you are!

There are two general classifications of fairies at ORF, the Seelie and the Unseelie. The Seelie are more prone to be benevolent to humans. While helpful and general kind, they can still be mischievous. The Unseelie are less sweet and more sour, with a delightfully wicked air to them and a love of the macabre. The Seelie are also known as the Summer Court and give their allegiance to Titania and Oberon from Beltaine (May) to Samhain (October). The Unseelie are under the head of Queen Mab, who rules from Samhain to Beltaine as the Winter Court. Like many folk, a fairies allegiance can be a flexible concept. But choosing light or dark is always an important distinction in one’s character.

Pixies, brownies, kelpies, selkies, red caps, hags, goblins, banshee, trolls, dryads, sprites! The list goes on and on. There are dozens of different fae folk depending upon which mythology you look at, and learning about them is a great place to start crafting your fairysona. Do a bit of research as to what each one means before you pick.

Pixies, for instance, are what humans most commonly recognize as a fairy, a little winged person with a friendly attitude. While a Kelpie is more like a mermaid with a penchant for drowning people. Some are more associated with benevolent or malevolent fairies, so be careful what you pick and how you portray it.

Long ago, the Avatar kept balance…

I’m joking! But the element of a fairy is an important characteristic to keep in mind. Earth/air/fire/water is a good place to star, but narrow it down from there. Fancy being an air fae? Are you of the clouds or the breeze? Maybe fire suits you best. Perhaps you’re an ember fairy or a sun fae! A water fairy could belong to the streams in the woods or the foam in an ocean wave. An earth fairy might be an oak dryad or a rose nymph. Go in-depth and expand upon the concept to help develop your fairysona. This will help you nail down an aesthetic later on.

Fairies are all about rules. Even if it’s only so they know how to bend them without breaking them! The most important are pretty well known; never give a fairy your name, never accept food or drink from a fairy, never step into a fairy ring. If you are the fairy, it’s important to understand why humans may be cautious around you. It’s also important if your local fairy community has rules of their own which they follow. Things like how to present yourself to the local court, how to behave around mortals, and what you can and can’t get away with while in your fairy garb. You don’t want to give your court a bad name! Talk to the local fairies and ask about how to get involved.

ALWAYS be kind to children

Even if you are the surliest boggle or moss-ridden hag, all fairies are fond of kids and treat them kindly. Children love fairies and are enraptured by them, so it’s important to let them enjoy the magic and be a part of it. Remember to always stay close to the parents and ask permission before letting the kid get close for a picture. Be especially careful this season with social distancing rules in place and making sure you don’t get into anyone’s personal space.

The fairy community of ORF is massive and growing every year! You won’t find a more wonderful group of open, friendly people willing to bring you into the fold and help you find your most fae self.

As a note, you don’t have to be a part of the community to dress as a fairy. These are just some suggestions if you’re looking to get more involved and become a part of the ORF fae courts. 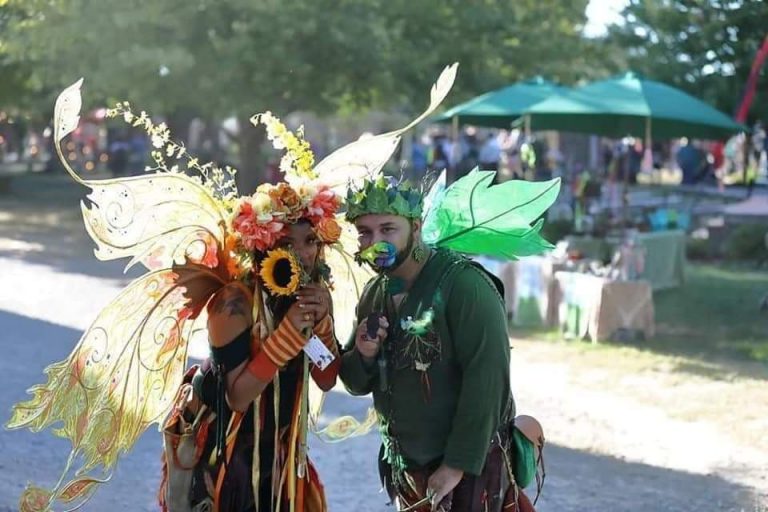 Rowan Duilleog Althrú (Leaf Changer) -You may catch a glimse of Rowan painting the leaves various colors for the fall. Rowan can also be seen with HUGE bubbles around him. 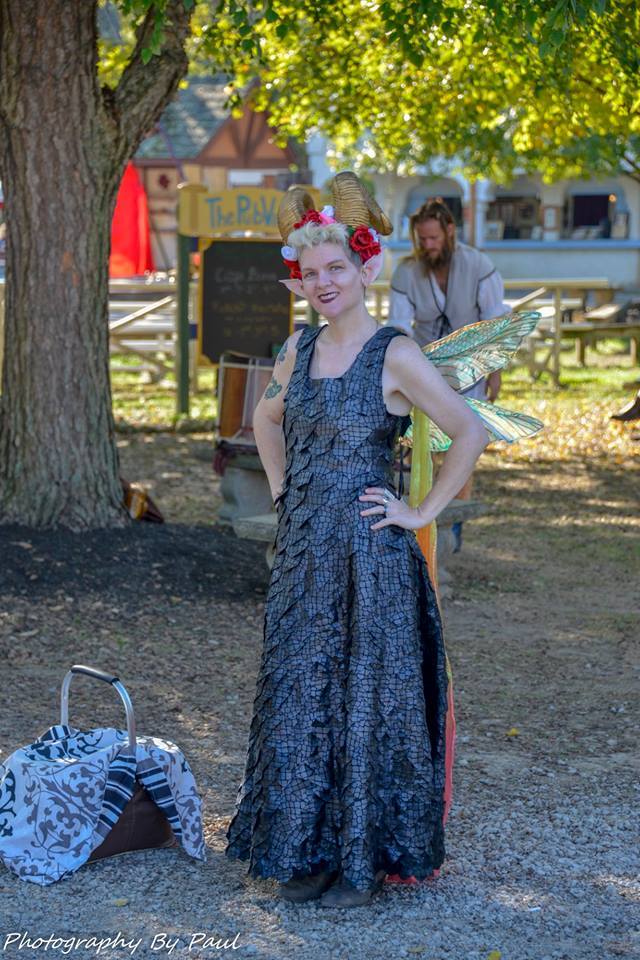 Queen Mab, Queen of unseelie fae, mother of all fairies, bringer of dreams and mead. 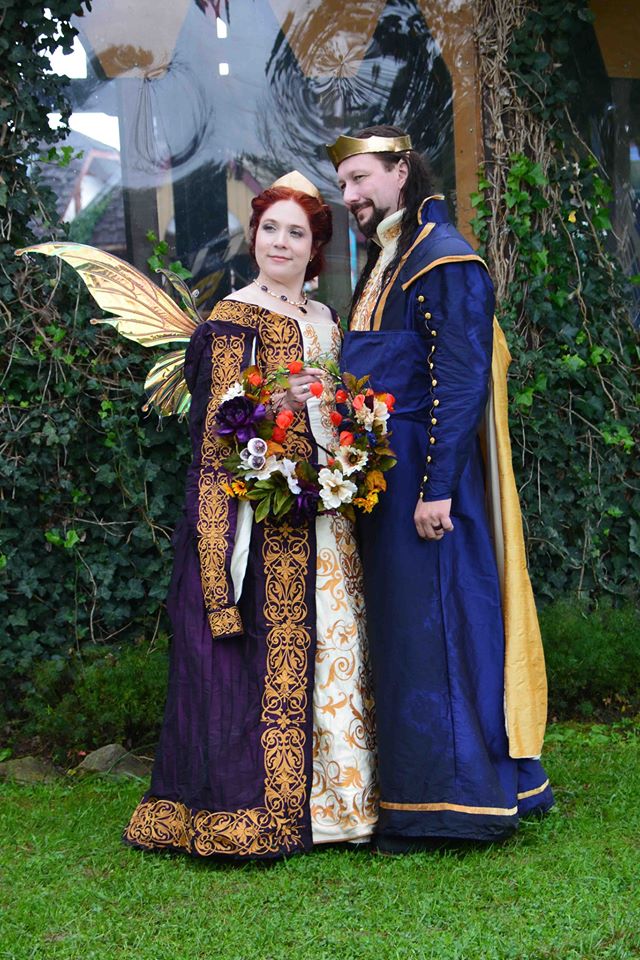 The High King and High Queen of the Summer Court, they can be found all over fair but most frequently by the Aleing Knight Pub! 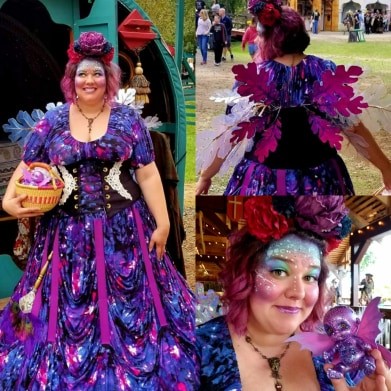 Luna Star. She is one of the Galaxy Fae. Possessing cosmic powers she breathes life into new born planets and grants wishes asked of shooting stars. She has a baby fairy in-training named Celestia. 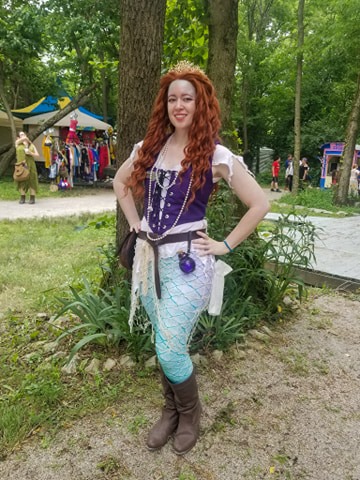 Davina – She enjoys being serenaded by the village musicians and gathering pretty things from the shops. Davina usually has gifts for children who wish to make a trade with a fae!