Behind the Gate: Cast Auditions

Behind the Gate: Cast Auditions 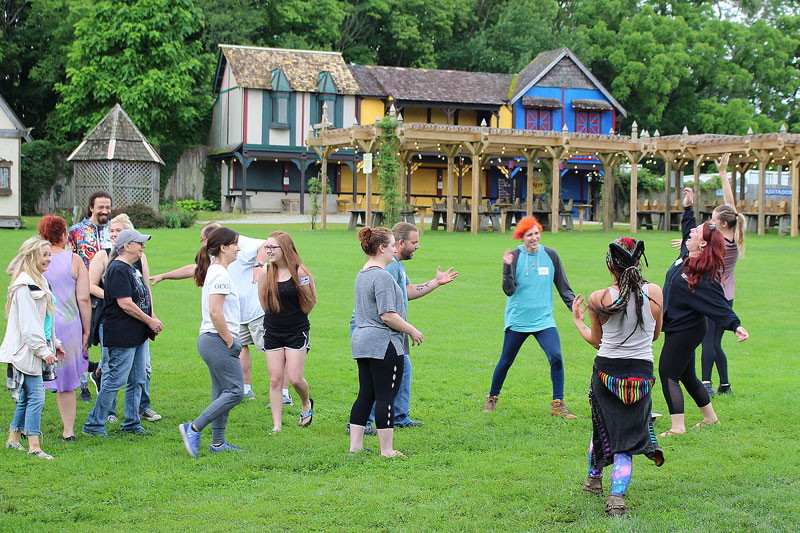 It takes a certain kind of person to wake up one day and decide “Hey! You know what I’d like to do? Dress up in three to five layers of upholstery grade fabric and go running around thirty five acres in all sorts of adverse weather conditions while talking in a 16th century English accent!” But those are precisely the kind of people you want to show up for a cast audition at ORF. It strikes me as funny that there are people in this world who aren’t even aware that our faire has a cast! They come in the gates with no knowledge of all the work and effort spent in the hot sun practicing accents, crafting a developed character, or painstakingly sewing garb.

In It for the Long Haul

Nine weeks before you walk in the front gate with your season pass and a hankering for turkey legs a group shows up on the grounds early in the morning. Comprised mostly of veteran cast members and performers, their task to see who has the talent and drive needed to make for a fitting addition to the village of Willy-Nilly. The manner of this has been refined over the years to create a vetting process which both encourages newcomers and challenges those who already have the acting chops for such a position. There are always opportunities available, no prior experience necessary.

The auditions occur over the last two Saturdays in June followed by two long months of rehearsals and a further nine weeks of the run. Endurance is the name of the game, but also a desire to come out and play with the people.

I always consider (cast) the heart of the festival.”

After registration and a bit of time to chat, the newbies are introduced to Chuck, their Casting Director for the next several months. A long-standing vet of the fair, he’s played everything from the Lord Mayor to a pirate captain and devotes a lot of time to making the ORF cast the best it can be. He leads the group over to the Aleing Knight pub for introductions to the rest of the staff, who will be assessing them for the remainder of the auditions process.

The first order of business? Get them up off their feet! The group is taken out to the Ups & Downs (the field between the Chessmatch and the Chapel) for some non-competitive improv games. These games aren’t truly about winning, but about staying in it for as long as you can. It gives people who’ve never met before the opportunity to interact and functions as a vehicle for everyone to come out of their shell and get to know one another. As the group plays through Whoosh/Bong/Zap and Medusa the veterans are watching closely. They’re looking for those who play well with others and what kind of personality will lend itself well to a needed village character. Having fun with it is a part of the process, and enthusiasm is key.

Shake Out the Jitters

After the first time jitters have been shaken out, the group is broken up for more assessment. It sounds much more grueling than it is! But make no mistake, this process has a purpose. I followed some of the people around as they went through the workshops. Cast auditions go far beyond the surface layer. If you want to be a part of the fighters group then the dance instructors are going to watch how you move. If you want to be a featured character then the improve instructor is going to see how you handle what’s thrown at you.

I think there is a decent balance between people who came in with no clear concept of who they want to be and people who have some basic structure for their desire on the cast. Neither of these is a bad thing. But it’s important to be a team player. You might have registered with the intention of becoming a pirate, but the casting director really thinks you’d make for an amazing gravedigger.

There are no small parts, only small actors.”

You would be surprised how much you can get into a role when you have the freedom to build that character up from scratch as opposed to fitting into a very stylized trope. What is going to be more interesting, another Jack Sparrow-esque pirate or the sunniest, most optimistic gravedigger you’ve ever met? There is nothing wrong with letting the directors know what you had in mind, but be open to their advice. It comes from years of experience.

How Do You Want to Contribute?

I wouldn’t be surprised if people find their first time a bit overwhelming. There is a lot thrown at you from the beginning. But the truth is, it all pans out pretty quickly. You have to think of cast as one big extended family. Everyone is there to support one another and part of that is contributing to the family as a whole. The easiest way to do this is to decide what you want to be involved in. There are a lot of options.

Choir is always in need of people, especially if you can play an instrument. They have a lot of ground to cover and there are a lot of opportunities to find your creative drive under their guidance.

Dance is a great way to participate and the English country dances are pretty easy to learn with a little practice. The Queen has been known to participate in them now and again so it makes for a great show for the patrons.

Fight group always garners a lot of attention. This should come as no surprise since it involves pirates, stunt show, and human combat chess match. It’s also a lot of hard work and choreography.

Each of these requires additional hours of dedication during rehearsals. When everyone else gets to go home on Saturday you’re planning to drive back or stay overnight on grounds so you can be there on Sunday to practice.

There is always a need for extra hands during the festival. If you put yourself out there and show you are willing to help you will be given a job to do. It also shows the cast that you are an active participant and a true member of the village. This means that returning cast members are given more responsibility and become ingratiated into faire culture.

As the last interviews are finished off I could see the staff congregate to discuss the potential of the day. Excitement bubbles at the pub and it’s clear this season has yielded a good crop so far! Veterans are good at finding places for everyone who is sincere about their commitment. Everyone is discussing who they want for their group and deciding who would make for a good fairy or witch. This is not a summer job at a theme park or carnival. Faire is a lifestyle. Once you get in it it becomes a part of your blood. You will learn the lingo, develop skills you didn’t know you had, and build a family that will become important to you. The auditions are just the first step to that. It is very exciting to be a part of this again, even in my own small way. I am greatly looking forward to how the new cast develops over the next few months!