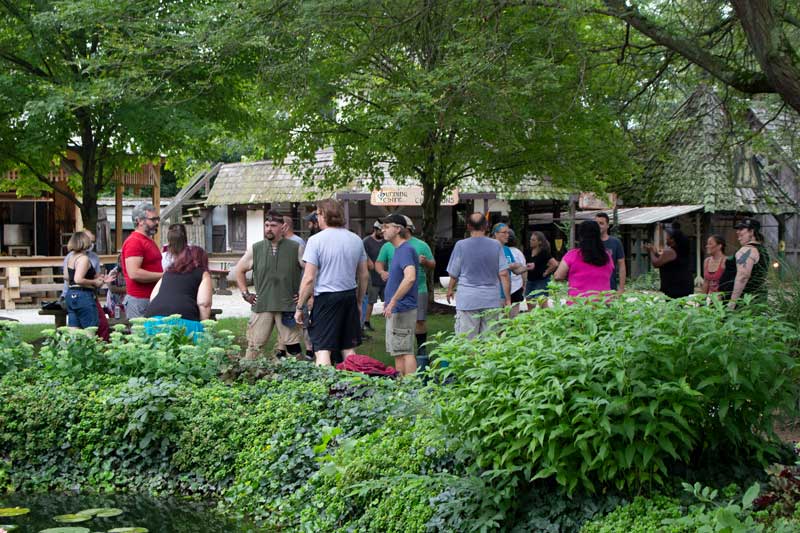 It’s always nice to see the various guilds and groups out here grow each year. New people coming into the park means more opportunities for people to find one another and bring the magic of the Ohio Renaissance Festival into their lives. People find community out here, and one of our fastest-growing groups is the ORFans.

Being an ORFan is like getting a season pass with a lot of extra special bonuses. They get an exclusive badge to help show off their pride in the festival and give them access to an ORFans-only rest area so they can rest in between catching shows. They get to walk under the ORFans banner during the daily parade, get discounts at our souvenir booths, and even get a special entrance to the faire. But quite possibly the best benefit to being a part of the ORFans group is getting a peek behind the curtain before the faire even begins.

“I went Saturday to the ORFan event and I had a lot of fun. This is only my second year being an ORFan so there were a few others and cast member that I recognized but just had never had the chance to actually stop and talk with, so it was nice to be able to finally do that. The day ended up being split into four different 1-hour sections – Improv, Music, Costuming, and Dancing. Each section gave a nice little taste into what it’s like to be apart of the cast during the festival. Of the four, my favorite section was the improv part. The majority of the time was spent playing a variety of small games as a group and was focused on two things: thinking on your feet and being constructive and reassuring to your peers. One of the big takeaways was about trying to refocus yourself from being competitive and always trying to win to playing just to have fun and being okay with losing. “It’s more fun to lose!“

They day started out with Improv, giving our special guests an opportunity to play some of the games that help loosen them up and get them ready to interact with one another. It’s often been said that trying to make friends as an adult is one of the hardest things about growing up. It gets a lot easier when someone throws you an imaginary ball and tells you to pass it between four people you just met. By the end of the game, people were starting to form into circles, chatting together like they’d known one another for years.

Music is an inherent and vital part of the renaissance festival. It might be interesting to learn that most of the songs you hear at the ren faire aren’t truly from the renaissance era. Many are from the 17th and 18th century, along with a healthy dose of sea shanties and original compositions by the performers. Our very own Wenches A’Wailing were kind enough to come over and teach the ORFans some of the classics. Irish Blessing, Roll Your Leg Over, and the favorite of Pub Sing, Mingulay Boat Song.

Cast costume director Thomas Nader, who also stands as the head of the new jousting company for 2022, Combatant’s Keep, was able to come over and show just how detailed the garb has to be if you want to work on the cast. Those who walk through the gate can, with a few minor exceptions, wear whatever they want. But the ORFans got a good taste of the accuracy and expense involved if they ever want to take on the challenge of historical garb.

We got an unexpected visit from the jousting horses, Maggie and Silverado as they went on a walk before heading over to the Arena of Champions. I don’t care what your age is, holding a crowd’s attention when friendly horses are an alternative is nearly impossible. It’s wonderful to know that while these two may be fierce competitors in the lists, they are sweethearts once the armor comes off.

And for the last workshop of the day, our Dance Mistress attended to the group and helped them to learn one of the Queen’s favorites so they can join in during court dance. You can find multiple opportunities to come and learn these dances for yourself. Court Dance happens at around 11 am at the Rose & Crown. Eight Hands Round has two chances at 1:30 on the Chess Field and 4:30 on the Downs. They’re always happy to teach guests so be sure to attend.

Remember when we talked about how the cast forms bonds with one another? Coming to the ORFans Boot Camp gives you the chance to do something similar. You get to come out and play, not just with others from the group but with cast members who come over and volunteer their time to show you how they do this year after year. It gives you the chance to get to know your fellow ORFans and have people to hang out with the next time you arrive beyond the gates. ORFans passes are sold out for the 2022 season, but keep your eyes open for 2023!