he History of Willy-Nilly on the Wash

Have you ever wondered about the history of the village of Willy-Nilly? Well, once upon a time… (Because all good stories start out that way, right?) Yes, well, once upon a time, the fair southern fields of what would one day become Southern Warwickshire…

“You had best get used to dirty clothes, for you will rarely have clean ones!”

Once upon a time… (Because all good stories start out that way, right?) Yes, well, once upon a time, the fair southern fields of what would one day become Southern Warwickshire were ruled by Ethelred, King of Mercia, and his wife, Ethelfleda. It was Ethelfleda who chose the site of our fair village in the early tenth century, though her lack of expertise in village-planning showed through when it was discovered that her favored location was almost completely unwatered. The River Leam was two miles away, and the village’s small wash only occasionally held water (more on that later), but Ethelfleda simply declared, “You had best get used to dirty clothes, for you will rarely have clean ones!” The last two words of this statement (originally spoken in a Mercian dialect), Waede Niwe, was taken as the village’s name, but residents- who didn’t always understand Ethelfleda’s speech and were, on the whole, rather isolated and unintelligent- had soon changed this to Willy-Nilly.

Interestingly, it wasn’t until after the name had changed- and after Ethelfleda had died- that eight of families who lived in Willy-Nilly at the time decided to formally charter their town. They became known as the founding families: Bucket, Faithworthy, Fiendish, Graves, Havoc, Poodleflogger, Scruffins, and Upson. Several of these families still have descendants among Willy-Nilly’s residents.

Willy-Nilly is awash in problems

The founding families worked tirelessly to turn their little settlement into a home, and the love they poured into the village began to make it feel like a truly magical place. However, they still couldn’t coax enough water to flow from the wash to sustain them as well as they had wanted. So, inspired by their outpouring of love, one villager suggested they start to literally pour water into the wash. The rest of the village, of course, thought this to be an excellent idea and immediately went to grab their buckets. Only after doing so did they realize that they had very little water to actually pour into the wash, and that was, in fact, the root of their problem.

The Fae Folk Save Willy-Nilly

Out of ideas and in need of some sort of a solution, the villagers decided instead to appeal to the Fae Folk. So, as any villager who wishes to please the fae, they began to lay out gifts in the dry creek bed. However, due to their limited means, these gifts always seemed slightly lackluster, including things like half-wilted flowers and a bowl of sugar (or maybe it was salt?). The overall quality of these gifts is now widely accepted as the reason for what happened next.

After months of leaving out these small offerings, a rather moody fae finally answered their calls. In the middle of that summer night, the small village was awakened by an unfamiliar sloshing sound, and soon after discovered that nearly half the village was flooded! By the time the sun rose the next day, most of the water had receded and the wash was left completely full. Then the villagers got a second shock when they investigated the waters and discovered a fae creature splashing around in the lazy wash. They were quick to replace their shock with joy and reverence for their new neighbor. And so the small village had earned itself a Patron Fae of Willy-Nilly to keep their humble (and now quite moody) wash.

This also began a great tradition of Willy-Nillians welcoming the Fae Folk into their village with excitement and awe. In turn, the village has become a place of magic and refuge for fae of all kinds too.

An admistration marked by success, madness, and silliness

Even after chartering, the village grew very slowly, due to three reasons: 1, Disease was rampant, and the Founding Families’ households did not rapidly multiply; 2, The wash was (and is) incredibly moody, as it runs in three phases: drought, flood, and slime; and 3, It is very difficult to get newcomers to settle in a place called Willy-Nilly.

But by the early fifteenth century, Willy-Nilly had nearly 100 residents- not that anyone could count that high. Though the village had gone some time without proper leadership, Thomas Beauchamp, eleventh Earl of Warwick, thought it time to change that. He appointed Hamhandy Maximilian Alexander Pudie as the first Lord Mayor of the village. One of his first Mayoral acts was an attempt at renaming the village to “Chipping Basset,” but the villagers resisted outright, and Mayor Pudie relented.

During Mayor Pudie’s administration, Willy-Nillians built their first permanent church: St. Ninian’s. The church sat on the land just at the top of the Downs- that is, the expanse of green space on the hill- looking over the village (and, notably, the pub) below. (This area is now known as the Upson Downs, and is often mistakenly called the “Ups ‘N Downs.” Rather, it is more properly named after Thomas Upson, of the founding family Upson, who died on the downs during a particularly disastrous rugby game in the fifteenth century.)

Since they named their church St. Ninian’s, it is only appropriate to note that Willy-Nillians celebrate St. Ninian’s Day each year on September 16th. Coincidentally, this is around the time of year when the wash tends to flow freely, and, as such, is when the entire town takes its annual bath. It was also the day that witch trials were historically held, though none have occurred since the first (and only) execution of a Willy-Nillian witch, Thusnelda Tinkleberry, in the early fifteenth century.

the succession and subsequent annexation of Booty-Rooty

Despite his early success with the church, the rest of Mayor Pudie’s time in Willy-Nilly was marked with a rather distinct lack of perspective on reality. He convinced the Earl of Warwick to add “on the Wash” to the town’s name, convinced it would draw in more settlers- which, of course, it didn’t. That spring, he decreed that all trees in the town must grow from the top down (so as to make the fruit easier to pick), and, by the following autumn, he was run out of town with his few meager supporters, mostly consisting of the O’Greenhoe family. They settled just seven miles away and founded a rival village, Booty-Rooty on the Bush. Willy-Nillians laughingly referred to it instead as “Rudie-Pudie What A Wuss.

Given Mayor Pudie’s leadership, and the O’Greenhoe’s penchant for raising pigs as part of the family, the residents of Booty-Rooty found it necessary to move their entire village every two years or so- and, by chance, they kept moving it closer to Willy-Nilly. Eventually, the two villages were all but adjacent, and the Earl of Warwick then declared that Willy-Nilly was to annex Booty-Rooty.

The O’Greenhoes were less than pleased with this, and petitioned the Queen to have their original town restored to them. The Queen agreed to this, on the terms that the O’Greenhoes could find the legendary “Boot Root,” which would prove their sovereignty over the contested lands. Needless to say, despite diligent work, it has not yet been found.

Wives down wells, a Great Fire, and the Great Goose Stampede

Christopher Thomas Lyndon, upon arriving in Willy-Nilly, fell in love with a merchant’s daughter, Amaryllis. Asking her father for her hand in marriage, he was denied (on account of his lack of station). Lyndon then went to the newly appointed Earl of Warwick, Lord Ambrose Dudley, to see about securing a job so as to win over Amaryllis’ father. Dudley had a penchant for card games, and a worse habit of making very bad bets. Lyndon won the Mayorship of Willy-Nilly in a poker game.

Lyndon took on the role of Lord Mayor (as well as marrying Amaryllis) shortly afterward. Their marriage ended in tragedy, however, when Amaryllis fell down the village well. Lyndon remarried, but his new bride met Amaryllis’ same fate shortly afterward. She was succeeded by Veronica Rose, and she by Belladonna, but each successive wife met the same fate as her predecessors.

Under Lyndon’s mayorship, Willy-Nilly grew significantly. The Y-Bridge over the wash was built at the center of the village, but shortly after this the Great Fire destroyed many of the other buildings in town, including both the pub and the church. (The cause of the fire is one of intense debate, though popular opinion places blame on the similarly timed Great Goose Stampede.)

In typical Willy-Nillian piety, the pub was immediately rebuilt. (There was a practical reasoning for this- you can pray in a pub, but you can’t drink in a church.) This rebuilt pub was named The Aleing Knight and still stands as a central fixture of the village today. The church was eventually rebuilt as well, and retained the name St. Ninian’s.

Mayor Lyndon eventually left his position in Willy-Nilly, though few people know why. As with the Great Fire, there are many theories, ranging from silly to absurd, but the truth is elusive as ever. Lyndon was succeeded by Thomas Reginald Wright, though Mayor Wright’s tenure was the shortest yet. He left Willy-Nilly in a rush one day, meeting Nathaniel Hollingsworth (and his wife, Synthia) on the road nearby, throwing the keys to the village at Synthia and quickly exclaiming, “I cannot take it anymore- here, you do it!”

This year, Queen Elizabeth herself has chosen to include Willy-Nilly on her progress. This is a joyous day for all, as no monarch has visited the town since the Queen’s royal parents in 1533. Willy-Nillians have spent much time and money working to improve the village in preparation for the Queen, eager to show their devotion to her and their hope for the future of England and of Willy-Nilly-on-the-Wash.

The Location of Willy-Nilly 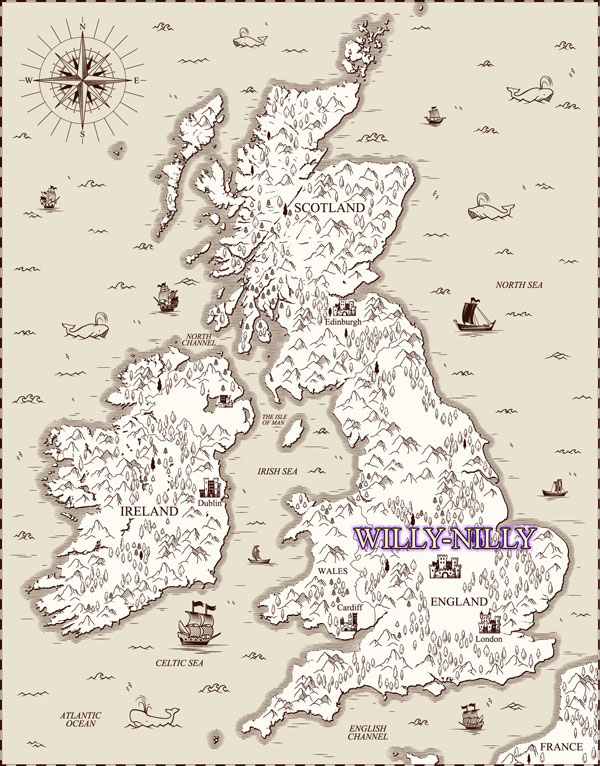