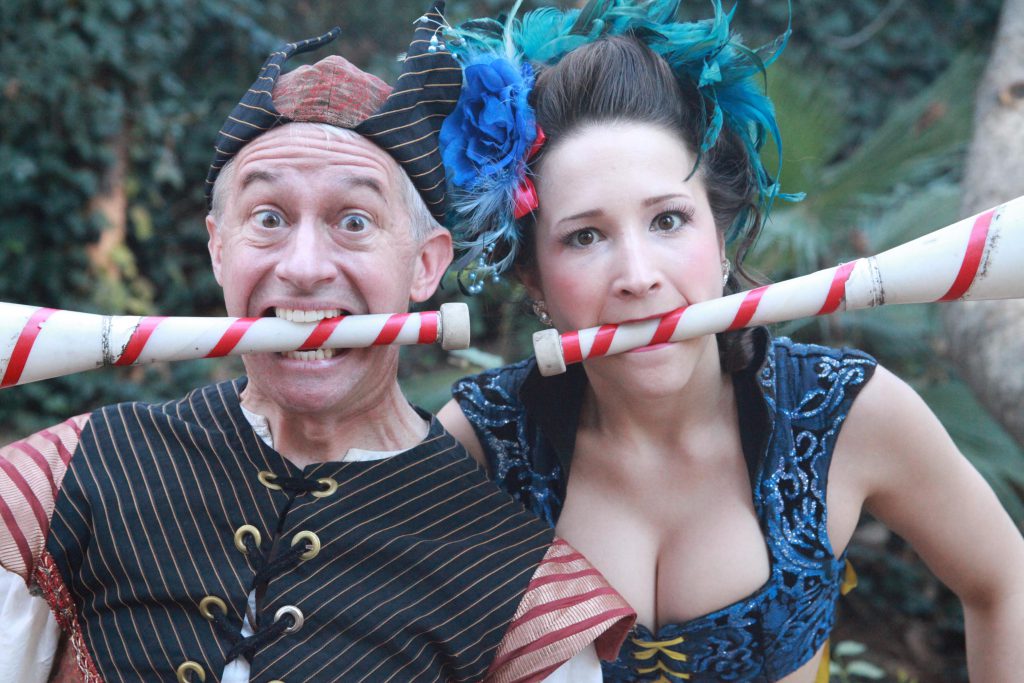 The Kamikaze Fireflies offer an exciting mix of comedy and circus. Children of all ages will enjoy their many tricks never seen anywhere else including juggling, hula hoops, German wheel, and whip cracking.

On August 29th, 2019 Casey Martin of the Kamikaze Fireflies attempts to break the Guinness World Record for most flaming hula hoops on the body at one time!

(Text disappears and is replaced by new text)

This attempt takes place at the Ohio Renaissance Festival and we were there to capture the historic moment.

(Scene transitions into two people standing on stage in front of a crowd wearing extremely large bubblegum pink inflatable balloons on top of their heads as the crowd laughs.)

(Male performer speaks with head inside the bubble)
Are you ready?

(Female performer speaks with head inside the bubble)
Yeah!

(Male performer speaks with head inside the bubble)
Kay go!

(Both performers now begin to shove the rest of their bodies into the inflated balloon amid loud squeaking sounds and a laughing crowd.)

(Woman in the crowd)
Oh my god!

(Female performer gets their entire body into the balloon first)

(Male performer gets into their balloon second)

(Only their feet can be seen sticking out)

(Female performer speaks)
Yeah. Drink it in! This is what you’re lookin at right now!

(Both performers jump while still encased in the balloon. When they land the balloons jiggle and the crowd laughs)

(Scene switches to text on black background)
And then it was time!

(Scene transitions to a female performer standing on a tall stool, holding five hula hoops around her waist. Each hula hoop has several poi sticks attached to it as the male performer walks around, lighting each one with a torch)

(Female performer speaks)
Light it up.

(Once the hoops are lit she lets go and begins to undulate her hips, dropping the hoops so they will spin in a circle while on fire. She raises her hands above her head)

(Hoops continue to spin as the female performer speaks inaudibly)

(Male performer comes in as the hoops descend down the female performer’s legs. Once they drop she jumps from the platform and the audience cheers. Text appears on screen)
She did it! Congratulations Casey!