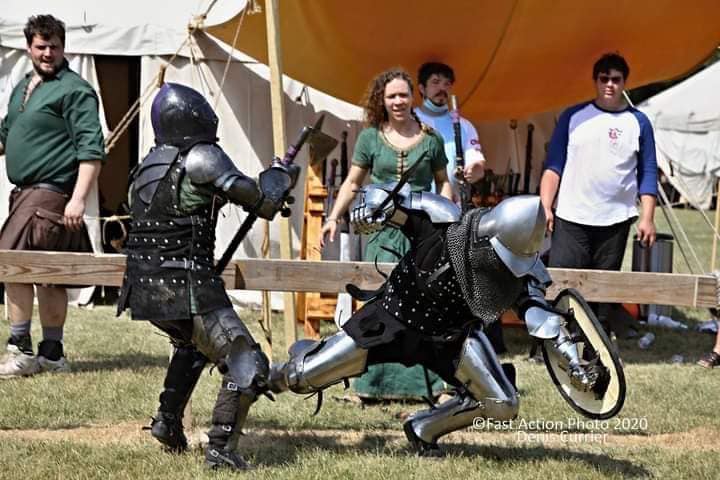 An armored combat group based in the Cincinnati area. Real fights with real armor, real weapon, and real combat.

(Female Announcer speaks)
How are you enjoying yourself so far?

(Camera pans over to combatants. Knight #1 wields an ax. Knight #2 wields a mace. A referee stands between them holding a pole)

(Female Announcer speaks)
Alright folks we have a few seconds left on the clock. Here we go!

(Knight #1 slams Knight #2 into the guard rail, using an ax to hold Knight #2 back as they turn. Knight #2 slams mace into Knight #1’s side repeatedly.

(Referee comes in with a pole at the ready)

(Knights continue to bludgeon one another)

(Referee places pole between Knights, calling a halt to the fight)

(Camera pans around to the crowd, passing by a knight in black gameness greeting fans)

(Camera pans around along the outside of the ring, moving past one of the guard rail assistants who prevent the railing from falling outward as Knights are backed into it)

(Knight #2 is grappled by previously unseen Knight #4 who hugs his weapon around Knight #1’s head, dragging him away from the camera.)

(Camera pans over to sword-wielding Knights #2 & #3 who are engaged in aggressive combat along the guard rail. Knight #2 is attempting to pull Knight #3 off the guard rail as Knight #5 comes in, slamming into Knight #2 and grappling them.)

(Two more knights come into the frame, fighting in the background)

(Knight #5 pulls Knight #2 off Knight #3, dragging him away from the railing. As Knight #5 & #2 are engaged in wrestling, Knight #3 approaches. To one side we can see Knight #1 attacking Knight #6 in the right corner of the ring)

(Knight #1 & Knight #3 are engaged in combat in the corner of the ring. In the background, another pair of knights are dueling. Knight #6 turns and charges into the fight between Knight #1 & #3, slamming into both of them. Knight #6 grabs Knight #3 around the head and drags him forward, all three knights tumbling to the ground together. Another Knight lies on the ground as one Knight remains standing)

(Camera pans around to the crowd. Boy #1 is pointing at one of the knights)

(Camera pans to Knight with bloody injury above his right eyebrow. Knight is smiling and nodding as one of the team pats him on the back. Female team member shrieks excitedly)

(Camera pans back to cheering crowd)

(Knight dressed in Mandalorian-inspired armor greets fans, letting one of the children hold their sword as a female team member assists)

(Female Team Member)
Everybody turn around! Boba’s gonna come in we’re gonna get a photo! Face the center.